CityU thanks donors on Thanksgiving Day

CityU expressed its gratitude to its donors, including philanthropists, businessmen, industrialists, staff and alumni at a dinner on 23 November.

The Thanksgiving Dinner, which was initiated by the Community Relations Committee under the University Council last year, drew 100 guests this year. 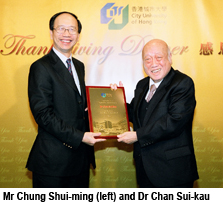 "Thanksgiving Day is a time for people to express their love for their families and friends," said Mr Chung Shui-ming, Council Chairman. "The Committee has made the right decision to thank the University's donors and supporters on this meaningful day."

Mr Chung pointed out that CityU had recorded a string of remarkable achievements in 2006. "We leapt from 178th to 154th in the rankings of the world's top universities. We have a total student intake of 26,000, a record among the universities in Hong Kong. As for campus development, the projects that are set to go ahead will increase the campus area by 60%, from the current 96,000 square metres to 160,000 square metres. These developments would not have been possible without support from the Government and generous contributions from society," he said.

Mr Chung commended teaching and administrative staff, alumni and students for their dedication in helping CityU to scale new heights, and he gave his heartiest thanks to the participants on behalf of the University. 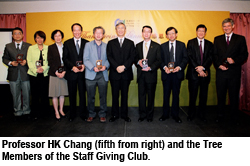 Professor H K Chang, University President, then gave a presentation on the $2 billion campus development projects. The key features include the Creative Media Centre, which will become a landmark building in the region and a base for training creative media talent in Hong Kong; the Academic-Administrative Building, which will cater to the development of the four-year-curriculum for undergraduates; the Phase 4 hostel, which will provide 700 additional residential places; and the Community College of CityU Building, which will house 6,000 associate degree students.

Professor Chang went on to reveal CityU's outstanding fundraising performance. "From 2003 to 2006, we raised an aggregate of more than $270 million, with the number of donors reaching 4,000," he said.

He added, "Autumn is a season to celebrate the harvest. When we join next year's Dinner, we will witness another fruitful harvest. The community, members of the Council, students, alumni and staff can help CityU to make its marks by working together."

Dr Dennis Sun Tai-lun, Chairman of the Community Relations Committee, reported on the work of the Committee during 2006. He said the mission of the Committee was to foster closer ties with the community in support of the development of the University

The Committee held three meetings this year. Opinion leaders, including columnists, editors and people from the education sector, the District Council and the Legislative Council, were invited to discuss the University's development at the second meeting.

The Thanksgiving Dinner was the third of these meetings. The aim is to convey the University's gratitude to its benefactors, including Dr Chan Sui-kau, Mr Chan Tai-ho, Dr Fong Yun-wah, Mr Raymond Leung, Mr Herman Hu and Mr Peter Tung Chi-sun, all of whom were in attendance at the dinner. 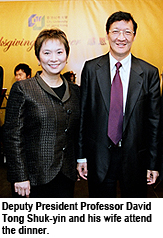 Mr Chung and Professor Chang took the opportunity to present souvenirs to major sponsors as a token of appreciation for their enthusiastic support. Awards were also given to Honorary Members and Tree Members of the Staff Giving Club, as well as other award-winning departments and individuals as follows:

The Staff Giving Club, launched by the Development and Alumni Relations Office, is a fundraising programme that encourages teaching and administrative staff to support the University by donating a small portion of their income on a regular basis.