City University of Hong Kong (CityU) has received ten awards in the first Hong Kong Information and Communications Technology (HKICT) Awards, including the Award of the Year. 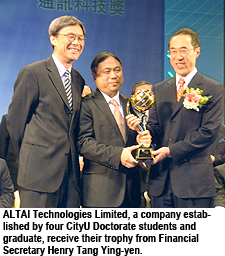 The company not only won the Wireless Technology Grand Award and Innovative Technology Gold Award at the awards ceremony that took place on 22 November, it also received the Award of the Year, beating the other six Grand Award winners.

The A8 WiFi Cellular Smart Base Station provides users with 10 times more coverage than other WiFi base stations on the market and lowers the required capital investment in wireless network infrastructure. The base station is currently available in the US, Europe, the Middle East, several Asia-Pacific countries and mainland China.

Under the guidance of Dr Sun Hongyi, an associate professor from the Department of Manufacturing Engineering and Engineering Management, the team has developed innovative technologies that are helping Hong Kong to transform into a knowledge-based economy.

Mr Lin, President of ALTAI Technology Limited, said he was very pleased that the HKICT industry had recognized his company’s achievements and he thanked the departments and staff at CityU. “There would be no such achievement without CityU’s support,” he said. 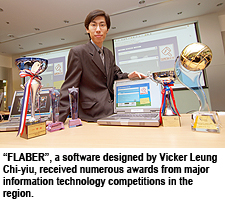 Vicker Leung Chi-yiu, a graduate of the Department of Computer Science, received the eYouth Grand Award and Software Gold Award for FLABER, software which allows users to exploit a full range of animation and interactive features available through Flash by using a simple drag-and-drop interface.

Earlier in the year, Vicker, now working on enhancing the usability of his software, took home the First Class Award in the Pan-Pearl River Delta Region University Information Technology Project Competition. In addition, he won a Merit Prize in the Asia Pacific Information and Communications Technology Awards.

“We know our CS graduates are among the best IT professionals in this region, if not the world, as evidenced by Vicker winning key student IT project awards,” said Dr Andy Chun Hon-wai, an associate professor in the Department of Computer Science and the supervisor on Vicker’s project.

In addition, by making his software available to everyone online, Vicker is contributing back to society. “Thousands of people around the world are already benefiting from Vicker’s innovative new technology,” Dr Chun said.

Oliver thanked Dr Xue Quan, an associate professor in the Department of Electronic Engineering, and said he was grateful for the support from the Department and CityU’s world-renowned Wireless Communications Research Centre. 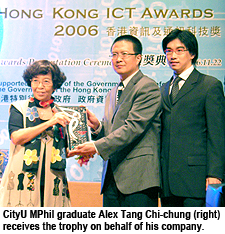 Alex Tang Chi-chung, an MPhil graduate from the Department of Computer Science, helped his company Intelligence Frontier Media Laboratory Limited to clinch the Digital Entertainment Grand Award, Digital Entertainment Software Award and a Certificate of Merit for Best Technology for “Moving Music”. This is an interactive game that turns body movement into music using the advanced motion-detection technology found in webcams. This game is now on the market and receiving positive feedback.

Chi-chung also worked on the "Body Brush" project, which was led by Professor (Chair) Horace Ip Ho-shing of the Department of Computer Science, while he was studying in CityU. 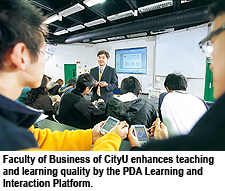 CityU’s Faculty of Business won an eLearning Certificate of Merit for the PDA Learning and Interaction Platform, which has been running for three years and involved more than 2,000 students. The PDA allows students in large classes to answer the teacher’s questions, and the teacher can give instant feedback.

What’s more, Dr Christina Sue-Chan, an assistant professor in the Department of Management, said that the PDAs help teachers find out whether or not intended learning outcomes had been achieved.

The aim of the HKICT Awards is to promote excellence and encourage local practitioners to develop innovative and creative ICT solutions which, in turn, enhance the image of ICT in Hong Kong both locally and internationally.