A recent graduate from the School of Creative Media at City University of Hong Kong (CityU) has won a top award at the 3rd Korea International Youth Film Festival.

Judy Ma Ping-on, a graduate of the BA in Creative Media programme, won the Technical Excellence Award for her six-minute animation Gilbert in 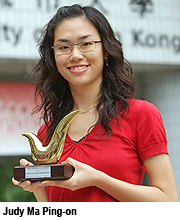 October. She beat 200 entries from across Asia, including Hong Kong, mainland China, Japan and South Korea. Twenty-four films were short-listed in all, two from Hong Kong and both from the School of Creative Media.

"The award has given me a great deal of encouragement," said Judy, whose film is about a thief who dreams he finds a map to a secret horde of treasure.

During her time at CityU, Judy fully utilized the learning opportunities on offer, participating in an international exchange programme at the University of Ulster in the UK where she studied design, an experience which broadened her vision, enriched her life and stimulated her creativity.

"I'd like to thank the staff at the School of Creative Media for their inspiring teaching. I've learnt so much from them and built up a strong foundation. I'll continue to learn and create better work," said Judy, adding special thanks to Dr Louisa Wei Shiyu, an assistant professor in the School, for supervising her work.

Dr Wei said she had encouraged Judy to submit to the festival because her film fitted in with the festival's theme this year, which was "Dream".

In her film, Judy uses stop-motion animation, a technique that she studied on a course called "Visual thinking and design" in her first year of studies in the School of Creative Media. The process involves drawing pictures by hand, then using software to bring the characters to life. 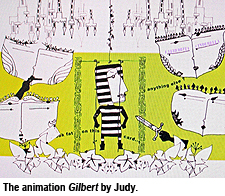 In Judy's film, the eponymous Gilbert wakes up and goes out to buy a pack of cigarettes. Inside he finds a map leading to some treasure. He follows the trail and on the way falls down a secret tunnel where he meets four princesses. They possess the secret to eternal youth but are, unfortunately, penniless. To get money, they steal from people that they lure to their castle using the maps placed in the cigarette packs.

Realizing Gilbert is a common thief with no money, the princesses throw him out of the tunnel, at which point Gilbert wakes up and realizes it was all just a dream.