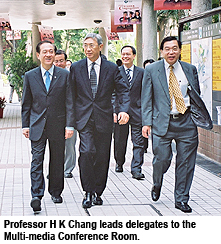 A six-member delegation from the China Association of Science and Technology, led by its Chairman Professor Han Qide, visited City University of Hong Kong (CityU) on 7 November.

In his speech, Professor Han reviewed recent developments in technology on the mainland and he expressed his deep admiration for CityU. 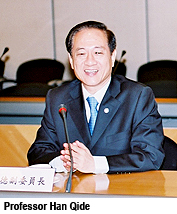 “The quality of a university is closely related with that of its president,” he said. “Although CityU focuses on applied research, I am impressed to see an emphasis on culture, especially the series of high-quality lectures on Chinese culture.”

Professor Han also commended CityU for its dedication to basic and applied research, factors that he said had contributed to the University’s recent outstanding achievements.

A university should take the initiative in conducting research without losing sight of the values of humanity, he added, and the aim should be to serve society with technological innovations.

Professor Han said he expected to gain fresh insights from this visit to CityU. 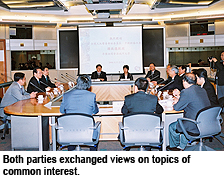 CityU faculty deans and department heads exchanged views with the delegation on converting innovations in technology into commercial products, a topic that interested both parties. Professor Tong asked Professor Han to talk about successful mainland practices in this area, while Professor Luk Kwai-man, Head of the Department of Electronic Engineering, talked about the efforts CityU was making to identify potential customers in Qingdao, Shandong province, to convert antenna and radio frequency circuitry, which is US-patented, into commercial products.

Professor Han said he felt that Hong Kong had done well in providing opportunities for talented people, especially those from the mainland. “There are a lot of highly-skilled people on the mainland. However, given the environment, they may not be able to fully utilize their expertise,” he said. Hong Kong could be a base for developing this talent, he suggested.

In summary, Professor Chang said this visit was very encouraging. “We hope to have more exchange activities like this in the future,” he said.