CityU Banquet cultivates strong sense of belonging to the University

More than 2,300 Council members, staff, alumni and students enjoyed a 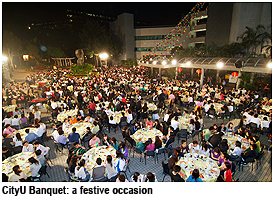 festive evening on 3 November at the CityU Banquet, which is organized by the Students' Union as an annual celebration of belonging to City University of Hong Kong (CityU).

In his welcoming address, Mr Chung said he was delighted to witness the growing recognition on the international stage for CityU's achievements in professional education and applied research, continued success in recruiting high-quality students and greater levels of fundraising . 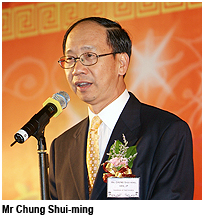 Referring to University's jump of 40 places to 53rd this year in the ranking of the world's top social science universities, and five places to 85th in the world’s top technology institutions, according to the Times Higher Education Supplement, Mr Chung said CityU would continue to nurture a dynamic breed of talented young people for the well being of Hong Kong and the region.

“These ‘ideal graduates’ will be adaptive, resilient, team-oriented and competent professionals who set excellent examples in the community and make us proud,” Mr Chung said.

Professor Chang praised this year's Banquet, the 11th since the inaugural event in 1995, saying he was honoured to be a part of the University. “This is the most memorable night in the CityU calendar, a time for us to express a strong sense of belonging to the University.” Even though this would be his last CityU Banquet as University President, Professor Chang said he would be very glad to return for future occasions. 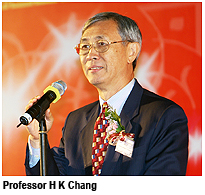 The President added that it was not just students who felt this sense of belonging; staff did, too, as demonstrated when some 1,200 members of staff were honoured for their dedicated long-service at a ceremony on 1 November.

Professor Chang went on to encourage students to protect the University’s reputation, since students’ competitiveness in the job market depended on graduation from a respected university. 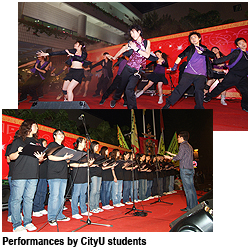 The fun-filled occasion also featured performances by the CityU Chinese Orchestra, CityU Choir, Dancing Society and Magic Society, as well as lucky draws. Students and staff who attended the dinner had a memorable night mingling with each other and enjoying the performances.

“Thanks to the support from Council Chairman, the President, staff and students, the Banquet has grown from a relatively small event in 1995 into a huge occasion,” said Mr Kelvin Li Chun-fung, President of the SU. “This year nearly 200 tables were booked up, and, looking ahead, I hope to meet my fellow students at the 40th CityU Banquet where I’ll be able to learn more about the achievements of the University,” he said.