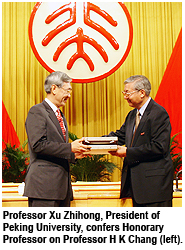 At the ceremony, Ms Ke Yang, Vice-President of Peking University, cited Professor Chang’s achievements. Prior to joining CityU as President, Professor Chang served as Dean in the School of Engineering at the University of Pittsburgh, US, and he was the Founding Dean of the School of Engineering at the Hong Kong University of Science and Technology. Chang is a recipient of the Gold Bauhinia Star (Hong Kong SAR) and Chevalier de la Légion d'Honneur (France), and is a Foreign Member of the Royal Academy of Engineering (UK). 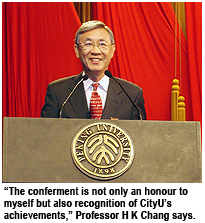 As a leader in the higher education sector, Professor Chang has made substantial contributions to promoting cultural exchange and collaboration between CityU and universities on the mainland. In his note of thanks, Professor Chang said the conferment was not only an honour to himself but also recognition of CityU’s achievements and its long-standing collaboration with Peking University.

“CityU aspires to be internationally recognized as a leading university in the Asia-Pacific region,” Professor Chang said.

“With the strategic positioning of ‘linking the mainland, facing the world’, CityU pro-actively fosters collaborations with higher education institutes in China and overseas countries. As an honorary professor at Peking University, I will uphold the spirit of this institution and work hard to contribute more to the development of democracy, science and education in China,” he added. 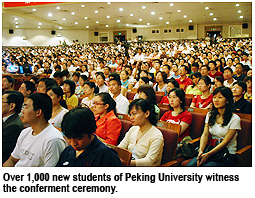 Since 1977, Peking University has conferred honorary professorships on eminent scientists and political & social leaders who have accomplished much in the realms of education, science, culture and social development.

Professor Louis Ignarro, Professor in the School of Medicine, UCLA , US, and winner of the 1988 Nobel Prize for Medicine, was also conferred Honorary Professor on the same day.