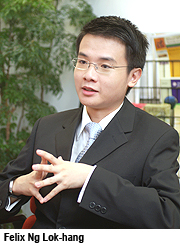 Felix Ng Lok-hang is going to take a Bachelor of Civil Law, a one-year postgraduate programme, at the University of Oxford after earning a bachelor’s degree (first-class ) in law at CityU this year. As testament to his academic prowess, Felix was also admitted to the master’s programme in law at the University of Cambridge and making the choice between the two prestigious universities was a tough call, but in the end he opted for his personal favorite.

Felix wants to become a barrister, a career that seems tailored made for him because he has been winning debates since he was in secondary school, and the School of Law has given him all the encouragement he needs. “The extensive professional knowledge and excellent litigation skills of the academics in the School of Law inspired me to become a barrister. Their professional and ethical conduct has had a big impact on me,” he said.

Felix achieved outstanding academic results at St. Joseph’s College, and he won a full scholarship from the Jockey Club when he enrolled at CityU in 2003.

“I’ll never forget this support. The scholarship let me concentrate on my studies and allowed me to start saving for further studies overseas. I will definitely give something back after I complete my studies,” Felix said. 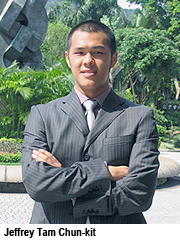 Felix’s classmate Jeffrey Tam Chun-kit will be studying in the same programme at Oxford. He, too, dreams of becoming a barrister. He was inspired partly by the debate surrounding Article 23, the controversial anti-subversion law that divided Hong Kong, in mid-2003 when he was contemplating what to major in at university.

“Originally, I planned to study politics, but I chose law because of the atmosphere in Hong Kong at the time. I want to combat social injustice in the future,” said Jeffrey, who will major in constitutional and anti-trust laws and the fair trading act.

Jeffrey modestly claimed that his academic results were not outstanding when he began studying at CityU, but he was very pleased with his results after three years of hard work.

“CityU’s teachers gave me a lot of opportunities to develop,” he said. For example, he was not as good as some of his classmates who had studied overseas or graduated from international schools at understanding cases in English. However, he clearly overcame these hurdles.

“I didn’t work part-time for three years and I even gave up the voluntary work which I had been involved with since secondary school. That was a hard decision, but I wanted to focus on my studies, and I can always take up my voluntary work later,” he said.

Living in Tuen Mun meant Jeffrey had good reason to thank CityU for providing him with hostel accommodation, thus saving him a long commute. “While the School of Law offered me the strictest academic training, hostel life enabled me to make friends with students from different disciplines and participate in meaningful extra curricula activities, all of which enriched my university life,” he said.

Both Felix and Jeffrey plan to study for the Postgraduate Certificate in Laws at CityU after finishing their master’s degrees in law next year, and then start their professional careers. 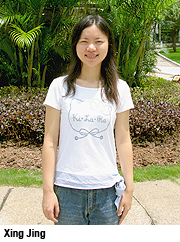 Xing Jing, a graduate on the MSc in applied economics in the Department of Economics and Finance, and Elliot Fung Yi-tuk, a graduate from the Juris Doctor programme in the School of Law, were also admitted to the University of Oxford.

Jing, who will take an MPhil in economics, comes from Chongqing and chose to further her studies at CityU after obtaining her bachelor’s degree from Peking University. While at CityU, Jing was most impressed by the international atmosphere. “CityU attracts a host of first-rate economics professors from all over the world. Their insights inspired me a lot. The frequent departmental seminars provided me with many opportunities to exchange ideas with scholars from renowned overseas institutions so I could keep abreast of the latest development in economics research.”

Elliot will take the Bachelor of Civil Law alongside Felix and Jeffrey. Before studying in CityU’s School of Law, he obtained a BSc degree in Political Science from Carnegie Mellon University, US, and an MBA from Loyola Marymount University, US.

“The Juris Doctor at CityU caters to those who did not major in law but are interested in studying it. Through this programme, I obtained my law degree in two years, and now I can further my studies at Oxford.”

Elliott also plans to study for the Postgraduate Certificate in Laws at CityU after Oxford and then start his career as a barrister. 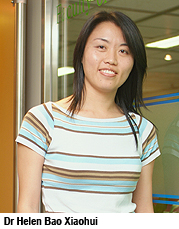 In addition to the above-mentioned students, Dr Helen Bao Xiaohui from the Department of Management Science has been hired by the University of Cambridge as a lecturer to teach real-estate finance. She attributes her success at landing her this job to her training at CityU.

“Real-estate finance is one of CityU’s most outstanding research areas and Hong Kong is one of the hottest spots in the global property market. So, I believe my training and my research work at CityU will enable me to facilitate exchange between the two universities,” said Dr Bao, who comes from Inner Mongolia and got her MA in statistics from the Dongbei University of Finance and Economics in Dalian City, Liaoning province.

She came to CityU to do her PhD in 2000 in the Department of Management Science, became an instructor in 2003 and obtained her PhD in 2004. She hopes that she will gain useful teaching and research experience at Cambridge and apply it to the booming China market.

When she first arrived in Hong Kong, she knew practically nothing about Hong Kong’s property market. But under the guidance of her supervisors, she began to do economic analysis and research on Hong Kong’s property market and became an expert. “The Centa-City Indices launched by CityU’s Department of Management Science in 1999 is the best of its kind in the world. It provides an accurate and speedy analysis of property trends and an online property evaluation of Hong Kong property,” she said.

In addition to training her in research, CityU provided Dr Bao with many opportunities to improve her teaching skills. “In this regard, I’m really very grateful to CityU. Even when I was a research student, my supervisor kept reminding me of the importance of improving my teaching techniques as well as improving my research skills," she said.

“My other supervisor even insisted on speaking to me only English in order to improve my spoken English. The Department strongly emphasizes the importance of case teaching and sponsored me to go to international case teaching workshops in North America, which has in turn enhanced my international competitiveness,” she said.