Three academics from the Department of English and Communication at 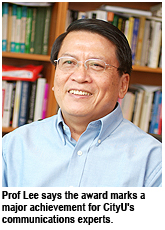 Professor (Chair) of Communication Lee Chin-chuan and Dr He Zhou, Associate Professor, won the Intercultural Communication Top Paper Award at the 56th annual conference of the ICA held in Dresden from 19 to 23 June. Their paper was entitled “Chinese Party Publicity Inc. Conglomerated: The Case of Shenzhen Press Group.” 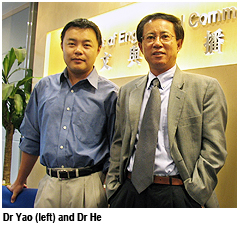 The study on the Shenzhen Press Group forms part of an ongoing Competitive Earmarked Research Grant project, the aim of which is to analyze the regional pluralism of the Chinese media groups as China responds to the forces of globalization.

“Our paper analyzes the Shenzhen press group as a case of the Chinese Communist Party press in action. It shows a dynamic ‘tug of war’ in which the political forces collide and collude with economic forces to exert an uneven impact on the press. Through ethnographic observations, interviews, and the examination of documents, we have tried to compare the Shenzhen press before and after its conglomeration over a 10-year period,” Professor Lee said.

Dr He said the major contribution of their paper was twofold. “First, it proposes a model of media political economy that is culturally sensitive to explain the changing Chinese press. Second, it will lead to further comparison with media systems in other major Chinese cities including Beijing, Shanghai, and Guangzhou,” he said.

This study is one of the first empirical studies examining the effects of playing video games which contain explicit sexual content.

“The primary goal of this study was to investigate the tendency for sexual thoughts, increased accessibility of negative female stereotypes to be primed, and a behavioral tendency to engage in sexual harassment as a result of playing a sexually-explicit video game portraying women as sex objects,” said Dr Yao, who collaborated with scholars from Ohio State University and University of California, Santa Barbara, on this project.

Professor Lee heads up the Centre for Communication Research, which aims to assess the cutting-edge issues facing communication under the forces of technological convergence and media globalization in the Asian context.

Two major projects are underway: a survey on media and globalization, to be conducted in various cities of mainland China, Hong Kong, and Taipei; and an investigation into cross-cultural press discourses on globalization including China, US, UK, South Korea, Australia, India, New Zealand, and Belgium.