City University of Hong Kong will confer honorary doctoral degrees on Mr Liu Changle, Mr Xu Guanhua and Professor Rosie Young Tse-tse in recognition of their significant contribution to learning and the well-being of society. The award ceremony will be held on 15 November, 2006 during the University’s Congregation. 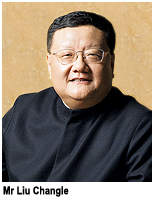 Mr Liu Changle, Chairman and Chief Executive Officer of Phoenix Satellite Television Holdings Ltd., will receive an Honorary Doctor of Letters. Mr Liu graduated from Beijing Broadcasting Institute (now known as the Communication University of China) in the early 1980s. He began his career as a journalist and founded Phoenix Satellite TV in March 1996 with partners. Mr Liu is a substantial shareholder of Asia Television Ltd. and a director of the International Academy of Television Arts and Sciences. On March 1, 2005, he was appointed a member of the Tenth National Committee of the Chinese People’s Political Consultative Conference. In November 2005 he was appointed a member of the Commission on Strategic Development by the Hong Kong Government. 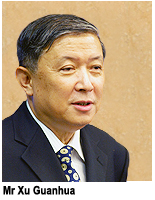 Mr Xu Guanhua, Minister of Science and Technology of China, will receive an Honorary Doctor of Science. Mr Xu, an academician of the Chinese Academy of Sciences, attended advanced studies on remote sensing science at the University of Stockholm in Sweden between 1979 and 1981. His main research area was resources remote sensing and geographical information system. He was a Vice-minister of the State Science and Technology Commission. A member of the Chinese Communist Party’s 16th Central Committee, Mr Xu is also an academician of the Academy of Sciences for the Third World and a foreign academician of the Royal Academy of Engineering Sciences of Sweden.

Professor Rosie Young, an honorary professor in medicine at the University of Hong Kong, will receive an Honorary Doctor of Science. Professor Young is also an honorary consultant at Queen Mary Hospital and Hong Kong Sanatorium & Hospital. She received a Bachelor of Medicine and a Bachelor of Surgery in 1953 and a Doctor of Medicine in 1959 from Hong Kong University. A dedicated educationist, Professor Young has contributed to education reform in Hong Kong. She was a Pro-Vice-Chancellor and held other senior positions at Hong Kong University before she retired in 1999. She was Chairman of the Education Commission between 1993 and 1998. Professor Young was awarded a Gold Bauhinia Star by the Hong Kong Government in 2002.