A lack of oxygen can trigger sex changes in fish 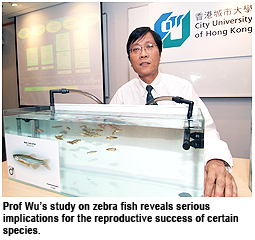 Researchers at City University of Hong Kong (CityU) have discovered that lower levels of oxygen in the water could alter the ratio of male and female fish among certain species, resulting in more males than females. Such an outcome could threaten certain species with extinction.

Professor (Chair) Rudolf Wu, Director of Centre for Coastal Pollution and Conservation at CityU, said a recent discovery showed that oxygen depletion, or hypoxia as it is known, could lead to more male fish and an imbalance in the sex ratio. Such a discrepancy would have a dramatic impact on the reproductive success of certain fish, and could mean population decline and possible extinction. 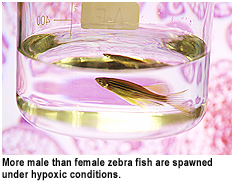 This is the first ever report in the world of science that suggests hypoxia can affect the sex development, sex differentiation and sex ratio in an animal, a tribute to the outstanding research capabilities of CityU staff.

The discovery began when it was noted by CityU researchers that hypoxia can affect the sex hormonal balance of carp, leading to problems in reproduction. Hypoxia means a lack of oxygen reaching blood and bodily tissue among organisms. In water, this means less than 2 parts per million of oxygen. Hypoxia can be a naturally occurring phenomenon, particularly in areas where salt and fresh waters meet, in estuaries such as the Pearl River Delta, for instance. In many places, hypoxic conditions nowadays are caused by pollution, such as nutrients, agricultural wastes and domestic waste waters running into lakes and the sea along coastal regions. 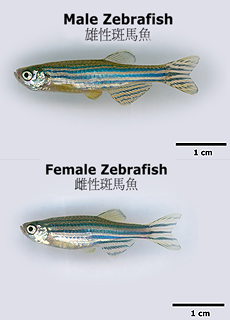 Further studies have revealed that hypoxia can inhibit the activities of certain genes that control the production of sex hormones and sexual differentiation in embryonic zebra fish. Professor Wu found that whereas 61% of zebra fish spawned into males under regular oxygen conditions, under hypoxic conditions, the number of males increased to 75%.

“This discovery is very relevant to Hong Kong and the region because waters in Tolo Harbour, Deep Bay and Victoria Harbour as well as waters to the south of Hong Kong are often hypoxic, especially in the summer,” Professor Wu said.

He said that to counter hypoxia it was necessary to reduce by-products of human development such as, among others, human waste, industrial pollution, and fertilizers from farming, that impact the natural world.

This, Prof Wu said, would minimize the occurrence of eutrophication, a process in which water becomes enriched with nutrients resulting in a proliferation of plant life, such as algae, which reduces the dissolved oxygen content and can instigate the extinction of other organisms.

Zebra fish were used in the experiments because it is a universal freshwater fish model, widely used in scientific and pollution research, prevalent in Asia, and its reproductive biology and genome has been worked out already.