The next generation of student leaders at City University of Hong Kong (CityU) has pledged to serve their fellow students, the community and Hong Kong.

About 40 members of the 21st Students' Union (SU) Executive Committee, Union Council, Arbitration Committee, Editorial Board and other student societies were sworn in at an inauguration ceremony at Wei Hing Theatre on 30 March.

To demonstrate unity, SU representatives participated in the symbolic act of pouring sand into a transparent box, which revealed the SU logo when filled. 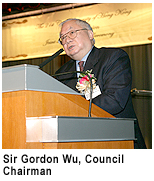 Sir Gordon Wu, Council Chairman, congratulated the new SU and thanked Professor H K Chang, University President, for his contributions over the years. "It is a commendable experience to become a member of the SU executive, to serve fellow students and to make contact with the community. I hope the new executives can work hard to the best of their abilities for everyone at the University," Sir Gordon said. 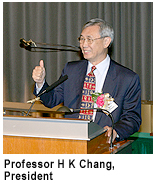 During his introductory comments, Professor Chang said CityU was attracting better quality students, a tribute to the University's growth and development in the last few years.

"Today CityU students are much more mature, better admired, more creative and more capable of dealing with a changing environment," Professor Chang said, adding that he was proud to see more CityU students appreciating the importance of the University maintaining a first-class reputation. 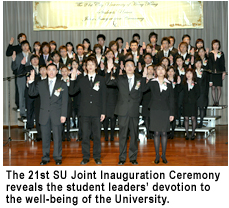 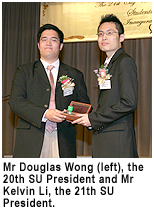 ; fight for student benefits and protect rights; improve the image of CityU in the eyes of the public; and encourage students to get more involved with the University and the local community," Mr Li said.

Established in 1986, the SU is run with a high degree of autonomy. The SU President is an internal member of the CityU Council, the supreme governing body of the University.