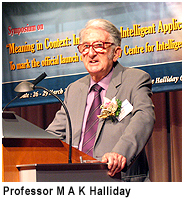 World renowned linguist Professor M A K Halliday delivered the inaugural lecture to mark the official launch of the Halliday Centre for Intelligent Applications of Language Studies (HCLS) at City University of Hong Kong on 26 March. The title of his talk was "Working with Meaning: Towards an Appliable Linguistics".

HCLS is a research centre in the Faculty of Humanities and Social Sciences and it aims to expand opportunities for collaboration with global partners in research relating to corpus linguistics, computational linguistics and comparative language studies.

Professor Halliday, Emeritus Professor of Linguistics at the University of Sydney and a Visiting Professor in the Department of Chinese, Translation and Linguistics (CTL) at CityU, is one of the world's most influential experts in applied linguistics. He is known for systemic functional linguistics, his comprehensive model of grammar which has been applied to English and numerous other languages including Chinese, Japanese, Vietnamese and Thai. 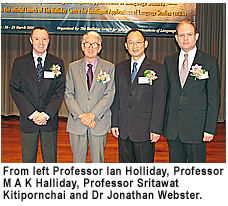 This theory emphasizes the social accountability of language, i.e. that language is rooted in social meaning and is a resource for communication, rather than a set of rules. His scholarship has influenced applied linguistics, computational linguistics and approaches to language problems in various professional fields.

“We are honoured to have Professor Halliday grant us the privilege of lending his name to the Centre," said Dr Jonathan Webster, Acting Director of the HCLS and Head of CTL. “Professor Halliday's theoretical approach, with its focus on modeling meaning and emphasis on social accountability, provides the 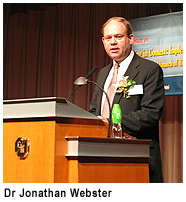 basis for the Halliday Centre's research in appliable linguistics.”

Other officiating guests include Professor Ian Holliday, Dean of the Faculty of Humanities and Social Sciences; and Professor Sritawat Kitipornchai, Professor (Chair) of Building and Construction and Chairman of the Advisory Group for Research Centre.

In his inaugural lecture, Professor Halliday examined how the scientific study of languages helps solve communication problems in many aspects of modern life, including education, culture, health and safety. He maintains that language - talking and listening, writing and reading - is such a significant part of our daily lives that we often take it for granted. He has investigated many activities in which an effective outcome depends on applying a theoretical understanding of language to solving problems, especially now that the exchange of information has become the dominant mode of economic action. The critical feature of language is that it is a resource for making meaning - a “semogenic” system; thus wherever people seek to intervene, they are working with meaning.

Professor Halliday's inaugural lecture on 26 March kicked off a symposium entitled “Meaning in Context: Implementing Intelligent Applications of Language Studies”, a series of lectures by scholars from the mainland and overseas on discourse, context and modeling behaviour, from 27 to 29 March.

HCLS was established in August 2005 as one of five research centers in FHS. The Centre undertakes research on comparative language study and corpus-based studies of legal, scientific, technical and academic texts and language, plus computing with meaning.

One of the proposed projects is the study of linguistic properties and the dimension of change in the translation process between Chinese and English. This is a collaboration with overseas universities including Saarland University, Germany, and Macquarie University, Australia. The findings will contribute significantly to translation studies, in particular machine translation.

HCLS is also developing courses with Sun Yat-sen (Zhongshan) University as part of an intensive summer school for postgraduate students.