Year of the dog heralds a year of prosperity

In a chilly afternoon on 10 February, more than 1,000 staff members celebrated the Chinese New Year in a warm and jovial atmosphere in the Chan Tai Ho Multi-purpose Hall. Spirits of the party ran high as Professor H K Chang, CityU President, announced that the University had registered a surplus of HK$400 million and that students and staff won numerous awards in 2005.

“The year of the dog heralds a year of prosperity,” said Professor Chang, as he also reported encouraging results from recent donation campaigns and the 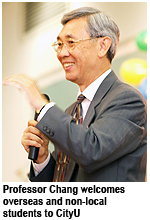 Government’s second matching grant that would close on Feb 28. He attributed the fund-raising success to hard work and the concerted efforts of all staff.

One of the highlights at this year’s celebrations was a talk show performed by Mr Cheung Chor-yung of the Community College of CityU’s Division of Social Studies and Dr Ma Ka-fai of the Chinese Civilisation Centre, during which Professor Chang was asked to elaborate on how the University managed to generate so much income. “People 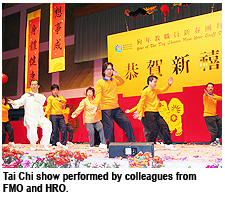 generate wealth,” Professor Chang said. “CityU people are of the city, in the city and for the city. With our dynamism and talent, we have built our reputation in this city. We are destined to progress with this city.”

Wearing a bright red scarf and a vibrant blue cheongsam (traditional Chinese garment) that matched the festive occasion, Professor Chang extended his warm wishes to the CityU community. “I wish you all progress, good fortune and good health in the new year,” he said. 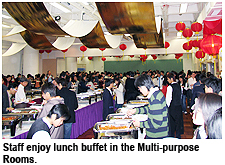 Organized by the Human Resources Office, the Chinese New Year party was indeed an occasion to relax and rejoice. Apart from enjoying a sumptuous lunch buffet, watching the traditional lion dance, participating in the lucky draw and nabbing red packets distributed by senior staff, colleagues were also treated to karaoke and tai chi  ( a kind of martial art) performed by members of staff. Rounding off the performance was a karaoke song by Professor Y S Wong, Vice-President (Administration), who drew warm applause from the audience.

Hidden dragons and crouching tigers greet the year of the rooster