Wang Zhenzi, a PhD student in the School of Creative Media (SCM) at City University of Hong Kong (CityU), took home the national “Top Ten Television Documentaries (Short Film) Award 2004 for her documentary, a single episode titled All about the Teacher.

CityU is dedicated to nurturing talents for the media industry and this award demonstrates that the creativity and excellence of SCM students is widely recognized in and beyond.

Ms Wang’s award-winning episode, part of the programme series Lives Near Far commissioned by Radio Television Hong Kong, portrayed the life of her Cantonese teacher, Mr Chiu. His enthusiasm in teaching and helping others has changed her impression of people. 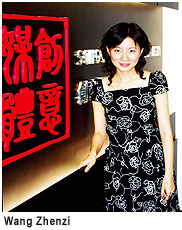 Ms Wang said she was overwhelmed when she heard the news. She was especially grateful to Mr Chiu and his friends whom she filmed. Other than participating in her documentary, they helped her, a compatriot from the mainland, to start a happy life in .

She also expressed her thanks to her supervisor Professor Liu Zhi-qiang and Professor Situ Zhaodun, a visiting professor at SCM, for their teaching; and to Ms Nancy Tong and Dr Louisa Wei, both assistant professors, for their encouragement and assistance in producing and filming All about the Teacher.

Ms Wang obtained her bachelor’s degree at the Communication University of China (formerly known as Beijing Broadcasting Institute) with a major in Television and Broadcasting Production. She finished her PhD thesis in late January in New Media Art and Technology at CityU.