Teenagers get a taste of structural engineering at CityU's BASIC 2005 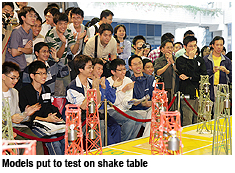 On 3rd December (Saturday), more than 100 secondary-school students from Hong Kong and became structural engineers for a day as they competed to design and build a transmission tower in the 4th Build and Shake Inter-school Competition (BASIC 2005), which was organised by the Department of Building and Construction (BC) of City University of Hong Kong.

The aim of the annual BASIC event is to stimulate the interest of teenagers in structural engineering by asking them to build a model of a real structure that must be able to withstand shaking as a result of an earthquake or typhoon using only basic construction materials, such as wood strips and glue sticks.

Thirty-six teams of Form 4 to 7 students spent the morning building models of transmission towers with a minimum height of 600 mm. To make the task that bit harder and more realistic, the model towers had to have two loading levels with two cross arms on each floor from which weights were hung

The model towers were put to the test on the special shaking table at CityU’s Heavy Structures Testing Laboratory. The 20-square-metre table, which is the largest of its kind among local universities, was made to generate a series of artificial earthquakes of gradually increasing intensity, and the model that stood intact the longest was proclaimed the winner.

"Achille Castiglioni 2005" put together by the team from SKH Li Ping Secondary School was the winner this year. It was also the third consecutive time that the school won the championship of the annual event. The first runner-up and second runner-up went to Yan Chai Hospital No. 2 Secondary School and respectively. 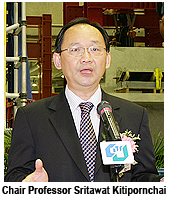 “We asked the secondary school students to design and build models of a real structure – a transmission tower,” said Chair Professor Sritawat Kitipornchai, Head of CityU’s BC. “By making the models as shake-resistant as possible the teams are actually trying to solve a real problem, which is to prevent power failure,” he said.