Professor H K Chang, President of City University of Hong Kong, said the University would become even more internationalized as it set out to attract more non-local students.

Professor Chang made these remarks when top officials from four consulates-general in visited CityU on November 24. The consuls were taken on a campus tour, visiting the Wireless Communications Laboratory and the , and met with staff and students. 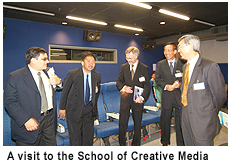 He said CityU employed faculty members from about 20 countries, and many of them, including the President himself, had experience teaching and researching in overseas universities.

The commitment to internationalization would enhance the University's standing on the global stage and improve the quality of its academic programmes.

Professor Chang said the language of instruction in CityU was English, and he stressed that the University's efforts to internationalize would become more concentrated in the future. CityU already has more than 200 exchange student agreements with overseas and mainland universities.

Approximately 1,000 students at CityU, or 5% of the student population, are non-local, including those from the mainland and overseas. Professor Chang said there was plenty of scope for further efforts to internationalize the student body. 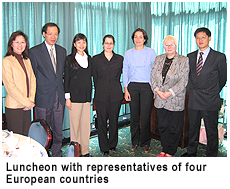 In addition, Professor Chang emphasized that CityU would continue to maintain good contacts with the diplomatic community in .

Meanwhile, the Dean of Student Learning, Professor Lilian Vrijmoed, hosted a luncheon for representatives of the European diplomatic community in on 22 November.

During the luncheon, the guests and the CityU representatives exchanged views on internationalization in tertiary education.

Bridging CityU with the international community