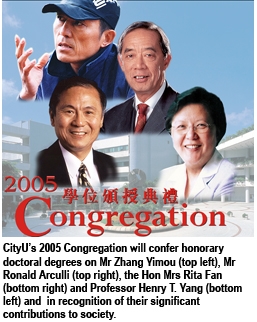 The renowned film maker Mr Zhang Yimou is to receive an Honorary Doctor of Letters from City University of Hong Kong (CityU) at the 2005 Congregation, from 8 to 11 and 15 to 16 November. He is one of four prominent individuals to be honoured with honorary doctoral degrees from CityU on 8 November in recognition of their enormous contributions to society. The other three are Mr Ronald Arculli, the Hon. Mrs Rita Fan, and Professor Henry T Yang.

This will be the third time CityU has granted Honorary Doctors of Letters, following those awarded to Dr Fong Yun-wah and Dr Chow Yun-fat in 2000 and 2002, respectively.

Mr Zhang was born in 1950 in Xian, . He graduated from the , one of three partner institutions in the groundbreaking trilateral partnership that CityU’s School of Creative Media established last year—the third is the School of Cinema-Television of the University of Southern California. Mr Zhang is one of the few Chinese directors to have been honoured repeatedly by the international film 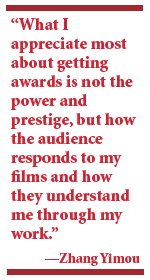 community. In 1987, he released his debut film, Red Sorghum, which won the Golden Bear at the International Film Festival, and he released Judou and Raise the Red Lantern in 1990 and 1991, respectively; both films won Silver Lions at the Venice Film Festival.

In 1992 and 1999, Mr Zhang’s The Story of Qiu Ju and Not One Less were awarded Golden Lions at the Venice Film Festival, and in 1999, The Road Home won the Silver Bear at the Berlin Film Festival. In 2004, he made the romantic martial arts feature, House of Flying Daggers, which received Best Foreign Language Film from the LA Film Critics Association and Best Director from the Boston Society of Film Critics.

It is not, however, the many awards that he is most proud of. “What I appreciate most about getting awards is not the power and prestige, but how the audience responds to my films and how they understand me through my work,” Mr Zhang said, adding that he hopes the audience can sense the strong visual expression and Chinese style he brings to his work.

In addition to Mr Zhang, three others will receive honorary doctorates. Mr Ronald Arculli, a member of HKSAR's Executive Council and Chairman of the Hong Kong Jockey Club, will receive an Honorary Doctor of Social Science. Founder and managing partner of the law firm Arculli and Associates. Mr Arculli has a long and distinguished record of public service.

The Hon. Mrs Rita Fan (Hsu Lai-tai), President of the Legislative Council, will receive an Honorary Doctor of Social Science. She is a deputy to the 10th National People’s Congress and supervising advisor of the Hong Kong Federation of Women.