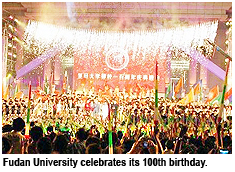 , established in 1905, was the first higher education institution privately funded and independently established by the Chinese in , Professor Chang said. “Over the past century, it has nurtured many intellectuals who have had a significant impact on the country and society,” he said.

“’s centennial anniversary also marks the 10th anniversary of the establishment of the links between our two universities. I would like to send my sincerest congratulations on behalf of City University of Hong Kong,” Professor Chang said. 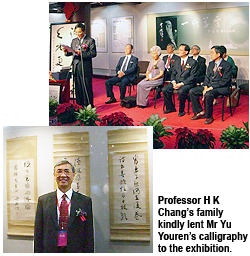 Professor Chang arrived on 23 September and was accompanied during his busy two-day trip by Ms Laura Law , a student in the Department of English and Communication at CityU and currently an exchange student at . (See attachment for the student’s reflections.)

Professor Chang’s first engagement was the opening ceremony of the Calligraphy Exhibition Hall, a permanent display area dedicated to the works of Mr Yu Youren, a master of calligraphy and one of the seven honoured founders of . The display area is housed in the . Mr Yu gave two pieces of his calligraphy to Professor Chang’s father in the past, and in order to celebrate the opening of the exhibition, which took place on 23 September, Professor Chang’s mother lent the two precious pieces for display in the new Exhibition Hall.  Professor Chang attended the opening ceremony as a family member of the donor, and the President of Fudan University, Professor Wang Shenghong, thanked Mr Yu’s family and all those who had donated works to the exhibition. 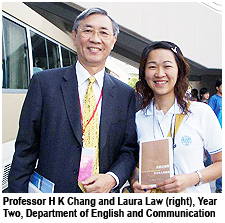 On 24 September, Professor Chang attended the centennial anniversary celebrations, noting the importance of showcasing students’ achievements during anniversary years. “A university is not a building only. Its true and ultimate achievement is the achievement of its students. If we follow through our education mission at CityU and continue to broaden our students’ worldview, I believe we will certainly have many more outstanding alumni to be proud of and to celebrate our 40th anniversary,” he said.

CityU and have been working closely since 1995 to establish stronger links. In particular, has helped CityU recruit undergraduates from the mainland and so far 51 mainland students have completed their first year foundation study at Fudan and then continued their studies at CityU.

A "date" with Professor Chang at Fudan University