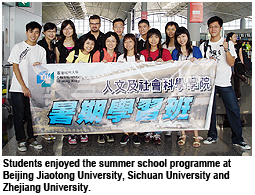 A new initiative by the FHS, the Summer School placed students attending credit-bearing courses at the three mainland universities. The first four weeks consisted of lectures taught by professors from CityU and mainland universities. Courses covered an array of subjects such as philosophy, religion, translation, film, history and public policy. Students earned three credits for successfully completing one course. The fifth week was a study tour. By visiting historical landscapes such as , , at Da Tong, and Huang Shan, students gained a better understanding of their cultural heritage. As part of their course work, students were required to write reports on their learning experiences.

Dr Arthur Cheung, FHS Faculty Coordinator for Student Activities (Mainland), said the Summer School had brought new experiences to students in terms of both academic pursuit and personal growth. Studying and living on mainland campuses allowed students to mingle with mainland undergraduates, whose industrious attitude to learning provided a useful example on which students could reflect. Students also gained first-hand knowledge of the social developments of mainland cities and had the opportunity to live more independently while away from their families. 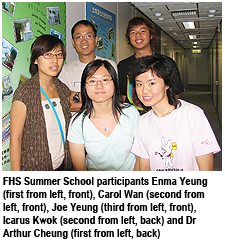 Yeung Kam-ling, Joe, a student of BA (Hons) Translation and Interpretation, selected courses on translation and interpretation, Chinese civilization, and English film studies. Attending lectures at , Joe said she gained a lot from studying with mainland students. “They are very serious about doing research. They ask lots of questions in class and read extensively. A thick book just takes them a few days to complete. I feel like I’m lagging behind and realize I should read and think more.” In addition, the School helped broadened her knowledge. In a course named “English and the World in Film”, she learned about the history and culture of different countries and had thoughtful discussions with peers who were well versed in the movie world. Subsequently, she has enhanced her knowledge about history and philosophy, and greatly improved her Putonghua.

Learning experiences outside the classroom also proved rewarding. Enma Yeung and Icarus Kwok, both at the , said they gained valuable knowledge about the latest development of the capital city. Enma, majoring in Teaching English as a Second Language, realized the huge difference between the rich and the poor when she saw beggars at tourist spots. Icarus, majoring in Policy Studies and Administration having previously studied leisure and tourism management on an associate degree programme, was pleased to see Beijing had started emphasizing sustainable development and hoped the city would showcase its modern facilities during the Olympic Games in 2008.

By playing a major role in coordinating activities at the Summer School, students could acquire valuable communication, interpersonal and problem-solving skills. Carol Wan, the treasurer of the student team studying at , helped out with the finance and coordination work and appreciated the versatility and hospitality of the students at . “Their hard work and disciplined approach to learning was an impressive example to us all,” she added.

CityU emphasizes professional education, applied research and whole person development. FHS Summer School fully exemplifies the spirit of whole person education. Credits earned from the Summer School can be counted as credits towards major or out-of-discipline subjects, depending on the majors of the students.