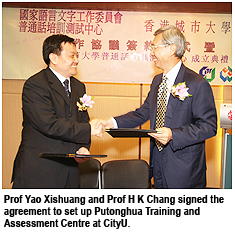 City of has responded to the growing demand for Putonghua-speaking professionals in by signing an agreement on 26 August with the State Language Commission (SLC) of to set up a new Putonghua Training and Assessment Centre on campus.

The Centre will prepare CityU staff and students for the National Putonghua Proficiency Test. Staff and students can take the test at the Centre. This agreement fully demonstrates the concerted effort CityU is making to enhance the language and communication skills of its students.

In his speech Professor Chang expressed his gratitude for ’s authorization to set up the Centre. “The new Putonghua Training and Assessment Centre allows our students and staff to prepare for and take the test on campus, which saves time and effort. It also encourages students to improve their Putonghua, which may ultimately increase their competitive edge.”

There are four experienced test examiners in CityU. Two tests a year are planned, with the first in February 2006. Classes will start in October 2005.

The Putonghua test is incorporated in the National Law on Language Usage. Twelve million examinees have taken the test since 1994. Introduced to in 1997, the test is conducted by two examiners – one from the SLC’s Putonghua Training and Assessment Centre and one from . The SLC sets questions while the accredited test centre, in this case CityU, provides training and administrative support.