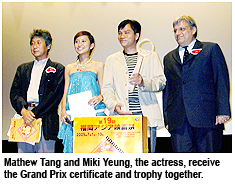 The independent film b420 by Mathew Tang, a graduate of School of Creative Media (SCM), has won the Grand Prix in the 19th Fukuoka Film Festival, the first ever winner from Hong Kong. The film has previously enjoyed critical acclaim after being selected for screening at the 29th Hong Kong International Film Festival in April this year. This latest award once again demonstrates the SCM’s success in fostering professionals for the creative media industry.

The 19th Fukuoka Film Festival was held 1-10 July. Seventeen films from , , mainland , and were screened. The film b420, directed, scripted and edited by Mr Tang, beat out three Korean nominations to win the Grand Prix. 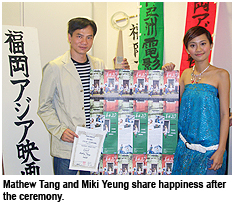 The film, a comedy-drama shot in Macau, explores the lives of three teenagers - Koey, Willy and Simon, played by promising young actors Miki Yeung, Sam Lee and Ben Hung, respectively - as they reach the end of adolescence and face the uncertainties of adulthood. The judges praised the film for its cinematography and overall production design, in particular its fresh visual impact. They also appreciated the sensitive way Mr Tang handled episodes about death without resorting to a traditionally sombre mood.

The film b420 was one of the official selections at the 52nd Sydney Film Festival and the Munich Film Festival held in June this year, and in September it will open the Hong Kong Asian Film Festival, organized by the Broadway Cinematheque. The film will go on general release later this year.

The support of his supervisor and friends was critical to his success, Mr Tang said. “I want to express my heartfelt thanks to the three producers, Mr Philip Lee, Mr Peter Yung and Mr Yee Chung-man.” Mr Lee, Assistant Professor of the SCM, supervised Mr Tang’s thesis. “He gave his generous support and helped a lot in the shooting and production processes.” Mr Tang said. The young film-maker also thanked a friend who lent him money to help cover production costs for this low-budget movie.

Mr Tang, now planning other projects, received his Master of Fine Arts from the SCM last year. The feature film b420 was his thesis project. Before shooting b420, Mathew worked as an assistant director for several experienced film directors, including Tsui Hak, Peter Chan, Lee Chi Ngai and Jackie Chan. He wrote the script for Jacob Cheung’s The Kid.