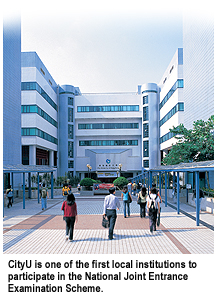 CityU is well on the way to achieving its goal of recruiting 150 high-school graduates from across the mainland. Listed as one of the nation's foremost higher-education institutions and a participant in the National Joint Entrance Examination Scheme, CityU plans to enroll the students from 17 provinces and cities in its undergraduate programmes.

CityU has just completed the first phase of its admission exercise in Beijing, Tianjin, Guangdong, Guangxi, Shanghai and Jiangsu. Both the quality and quantity of candidates are outstandingly high. For instance, the number of students recruited from Beijing is more than double that expected. 25 candidates have obtained a score that surpasses Beijing's Band One Baseline by at least 80 marks, with the top student scoring over 142 marks. All of them will be awarded CityU's first-class scholarships of HK$60,000 per annum for four years. The arts and science students accepted by the University have an average score exceeding the baseline by 50 and 87 marks respectively.

The number of students recruited from Guangdong has also exceeded the target. Among them, 10 outstanding applicants will be awarded the University’s first-class scholarships. The arts and science students admitted obtained scores surpassing the Band One Baseline by 74 marks on average. The fact that these students have chosen to study at CityU shows that the University is recognized by Guangdong candidates as an elite university. Not only are its entrance requirements comparable to leading universities in the province, but it has a growing reputation for excellence.

Encouraging admission results have also been achieved in Tianjin. One of the candidates recruited to CityU's Faculty of Science and Engineering ranked in the top 0.5% among all high-school graduates in the city.

Similarly, in Jiangsu and Guangxi, the number of students admitted exceeded the targets. All Jiangsu candidates made CityU their first choice, reflecting that the University is viewed as one of the country's top tertiary institutions.

CityU started to recruit self-financing mainland students in the 2003/04 academic year. It was one of the first local institutions to participate in the National Joint Entrance Examination Scheme this year, with the aim of providing further study opportunities for outstanding mainland students and attracting more talent to Hong Kong.