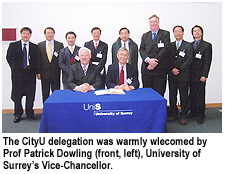 In an effort to expand CityU’s academic ties and exchange programmes with, and to benchmark CityU against, tertiary education institutions in Europe, Professor H K Chang, University President, led a delegation to visit universities in the UK, Denmark, Sweden, Norway, and the Netherlands, from 3 to 9 April. The trip reaffirmed CityU’s key role in serving society via leading-edge scholarship and international partnerships. CityU is set to sign academic and student exchange agreements with two of the five European universities visited. 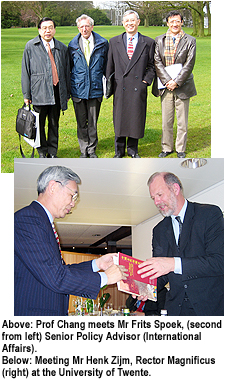 Delegation members also included Professor David Tong, Deputy President; Professor Roderick Wong, Dean of Research and Graduate Studies; Professor Johnny Chan and Professor Paul Lam, Associate Deans of the Faculty of Science and Engineering; Professor Matthew Lee, Associate Dean (Research and Graduate Programmes) of the Faculty of Business; Professor C C Lee, Head of the Department of English and Communication; and Dr Zhu Guobin, Director of External Liaison and Cooperation Office. It visited three universities known for their focus on applied research, namely, the University of Surrey (UniS) in the , the Technical University of Denmark and the University of Twente (UT) in the Netherlands. The CityU delegation met senior academics and visited laboratories and other units in these universities to grasp the extent of their research orientation, their engagement in technology transfer and their professional training programs.

A common theme emerged from these applied research-oriented universities: an unequivocal stance -- leading edge basic research is absolutely essential for successful outcomes in applied research. The delegation was informed by the University of Twente that “research at UT is mainly of a ‘fundamental-strategic’ nature; it focuses on issues which break fresh scientific ground and, at the same time, respond to the needs of society” and “striking new technologies arise when excellence in science is bridged to industry”. The exchange of knowledge between its faculties and industry is one of UT’s core strengths. It should be noted that UT ranks high both in education and research -- number one in education in the Netherlands and number six in research in Europe. 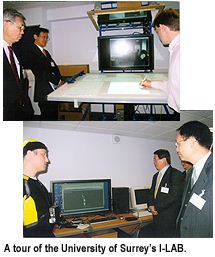 Positioning itself as a research-led university and a leading enterprise university, UniS is among the vanguard of universities with highly productive relationships with industry and commerce. Moreover, its consistently impressive graduate employment record, with over 98% of graduates in 2002 finding employment or further training within six months of graduation, earned UniS the title of “The University for Jobs” from the Sunday Times. Professor Patrick Dowling, Vice-Chancellor of UniS, stated that UniS is an “entrepreneur-based and research-based university with a real world experience for students”. He also congratulated the intellectual prominence and important accomplishments that CityU has attained in the past 20 years.

Professor Wong was particularly impressed by the UniS perspective: having a dual research mission -- basic and applied, each informing the other. “They, too, believe that innovation in research is central to scholarly applied research,” Professor Wong said. “The universities we visited strongly encourage research that generates new ideas and knowledge.”

Aligned along the axis that links professional education with applied research, CityU is on par with UniS and the in terms of direction and scholarly achievements. CityU considers these universities as its benchmarks. 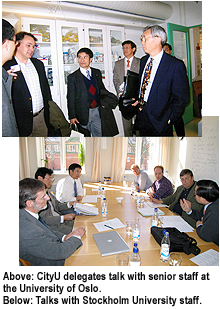 The delegation successfully strengthened ties between CityU, its Faculties of Business and of Science and Engineering and their respective counterparts in the University of Oslo in , the Stockholm University in and the Technical University of Denmark. Formal academic and student exchange agreements will soon be signed between CityU and the universities in Norway and Sweden, where the mother tongue of the majority of their students is a European language.

“We had a thorough exchange with the institutions we visited,” Professor Chang said. “All five universities have outstanding scholarly achievements suitable for CityU’s reference. UniS and the UT stress professional education and leading-edge research attuned to the particular needs of society. While their main thrust may be practical matters such as applied research and graduate employment placement, these universities maintain rigorous scholarship in basic research as well. Despite their relatively short history, they aspire to become world-class universities. The pride of their staff in their achievements in scholarship and the confidence they exuded in their institutions’ role in society were contagious. We learned a lot from them. After the visit, we are all the more convinced that CityU is on the right track in pursuing excellence in what we do, be it teaching, professional training or applied research.”