A dream comes true for CityU student, Christine To 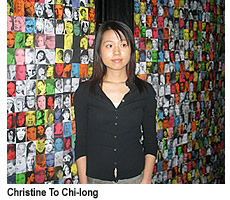 “Creativity stems from inspiration. But where can we get that inspiration?”  Christine To asks. "Personally, I try to free myself by not anticipating outcomes, not confining my imagination, and not holding any specific expectations." These words of wisdom are worth taking to heart--after all, the third-year School of Creative Media (SCM) student happens to be the youngest scriptwriter in the history of Hong Kong film.

Using how an apple should be wrapped up as an example for illustration, she says, "If we only consider using paper for wrapping, we are too constrained by conventional thinking. Instead, we should open up our imaginations for new ideas on packaging. That would surely be more fun." As a good way to sharpen her creativity, she jots down her thoughts whenever she comes across something interesting.

Christine has loved movies and stories since  childhood. Determined to embark a career in the film and media industry, she applied for the SCM’s Bachelor of  Arts (Hons) in Creative Media as her first choice for undergraduate study. Now, she studies in film directing, script writing and editing. Her creativity was appreciated by Mr Patrick Tam, a renowned film director, and currently an SCM Consultant. Mr Tam recommended Christine's work to the local filmmaker Mr Eric Tsang. With Mr Tsang’s support, Christine was given the chance to write the script for a major local production---the film "Jiang Hu".

Mr Tam said Christine is very attentive and sensitive to people and things in her surroundings. She is a highly creative young person with strong perceptions of visual images.

"Many of my classmates also have participated in activities related to art direction and film production," Christine was quick to point out in a media interview. "I was just lucky to be able to be a scriptwriter." She is grateful to the teachers at SCM who encouraged her sensitivity of observation and creativity. "Mr Philip Lee's course helps me learn about Hollywood film production techniques, while Mr Tam helps me understand how to make good use of visual images to express meaning," she said. Most importantly, Christine learned to be serious about creative work and persistently strive for excellence.

At first, CityU seemed like a big shopping mall to Christine. Now, she enjoys  friendships with classmates and teachers, often analyzing film plots and production with them. She enjoys these harmonious relationships and, especially, the small group discussion teaching method adopted by the SCM. "I have built up my confidence and broadened my perspective," Christine said. She has found that CityU emphasizes not only practical knowledge, but also critical thinking and social skills. Without such good training, she feels that she would not have been so successful so soon.

Christine's pleasant and optimistic personality is probably shaped by her parents, who respect her decision to pursue her own goal. "I am grateful to my parents for trusting me and granting me the freedom to choose what subject to study. They do not force me to take up those 'easy-to-make-money' study programmes."

With a supportive family and fulfilling university life, what is the next goal Christine wants to achieve? "I want to make a film that tells about my life of growing up," she says. For the time being, she is concentrating on her studies. She encourages young people interested in creative work to upgrade their skills by learning and reading more, and grasping opportunities to explore to new things and environments. "Get prepared and work hard. That will help you realize your dream."