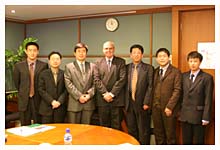 A five-member delegation from the Beijing WTO Affairs Centre visited CityU 29 March, looking for opportunities of co-operation with the WTO Law Dispute Resolution Centre (WTODR Centre). They went away with a collection of interesting ideas and actionable leads.

The Beijing Centre, a research institute and policy think tank for the Beijing Municipal Government on issues dealing with the World Trade Organization and related legal matters, is the latest group of eminent visitors descending on CityU campus, attracted by the strength and reputation of the WTODR, under the aegis of the School of Law (SLW).  Recent visitors included Mr Pascal Lamy, European Union’s Commissioner for Trade, and Ms Amina Mohamed, Ambassador of Kenya and Permanent Representative to the WTO and the United Nations. 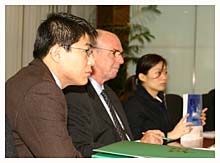 Led by Professor Deng Hongbo, Director, the Beijing Centre delegation met with SLW (Chair) Professor Peter Malanczuk, WTODR Centre’s Director, and Dr Henry S Gao, SLW Lecturer, who introduced to the visitors WTODR Centre’s scope of work and research focus. The Beijing experts expressed strong interest in working with CityU, as it matches with their portfolio. In particular they are considering exchange of staff, joint training programmes and research projects of a “practical nature” between the two sides.

One possible area of interest, according to Professor Malanczuk, would be the study of CEPA’s impact on the Hong Kong-Beijing trade relationship. “This will fit well into the work foci of our two centres and extend the present CEPA discussion beyond the Pearl River Delta Region to Beijing and north China,” he told the visitors, who agreed.

The Beijing Centre also acts as the training school for municipal trade officials who have to quickly grasp China’s latest ties with the WTO. The Centre focuses on training “hands-on” professionals for the government and industry, while Peking and Tsinghua universities and the like focus more on academic research, according to Professor Deng.

On behalf of the Beijing Municipal Government, the Beijing Centre has drawn up a five-year programme for training trade officials in knowledge of the WTO. A typical year’s plan, like the one in 2003, would include organizing a nine-month domestic programme for 108 officials, to be followed by an additional three-month programme in Geneva, or Monterey, California, for 27 participants. Professor Malanczuk said that the WTODR Centre would be willing to help contribute to the five-year plan. This could be done through giving lectures in the domestic training programme or, using his extensive personal network in Europe, helping arrange for the trainees to receive training there. 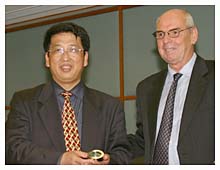 Professor Deng also invited Professor Malanczuk to speak at the 4th WTO and China: Beijing International Forum later this year. This coming event will be organized around the theme of dispute resolution, an area in which the WTODR Centre can claim exceptional strength. The Forum is an annual event organized by the Beijing Centre, on behalf of the Municipal Government, that draws high-level attendance from WTO officials and representatives of member nations, not to mention intense international media attention.

Building up ties with the Beijing Centre will complement and further strength WTODR Centre’s growing relationship with mainland institutions. Professor Malanczuk is already a Visiting Professor at many reputable universities in China and he is also a foreign member of the China International Economic Trade Arbitration Commission.