A promising name has been conferred upon the second of three residential blocks in CityU's Student Hostel Project Phase I in honour of the generous contribution to its development by the Hongkong and Shanghai Banking Corporation Limited (HSBC). Officiating at the naming ceremony of "HSBC Prosperity Hall" on 27 February, were HSBC General Manager and University Treasurer Mr Raymond Or; Professor H K Chang, CityU President; and CityU's Deputy Council Chairman, Mr Chung Shui-ming, GBS, JP, who opened the proceedings with a welcome address to some 200 guests, staff, students and media in attendance.

"I have been associated with CityU since 1998," Mr Chung observed, "and the development of the hostels is an expression of CityU's longstanding commitment to providing a wholesome education. Hostel living fosters leadership and social skills."

Mr Or remarked that HSBC was "honoured to provide support to such a worthwhile project." Professor Chang thanked Mr

Chung and Mr Or for their efforts and backing, adding, "Personally, it has been my cherished dream to see the hostels go up one by one... We hope that by establishing the hostels, the quality of our education will be raised one more notch." 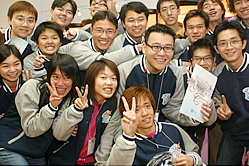 Students began moving into the Hall in August 2002. Christine Foo, a second year student in the Department of English and Communications who served as the MC at the naming ceremony, was among them. "It is an honour and a pleasure for me to take part in the naming ceremony," she said, "because the student hostels enrich our university life." Master's student in the Department of Manufacturing Engineering and Engineering Management and Residence Tutor, Kenneth Chu echoed those sentiments, saying, "I only moved into HSBC Prosperity Hall in August last year, but I really like it. I think the best thing about it is the Hall spirit—residents truly feel that it's 'home.'"

After the unveiling of the Hall's designation above the entrance, some student residents sang a song called "The spirit of Prosperity" and student resident representatives presented souvenirs to Mr Chung, Mr Or and Professor Chang—baseball-style jackets with "PH" emblazoned on the front. Everyone was then invited to peruse the display of hostel photos with captions that read 'We share', 'We serve', 'We involve', 'We learn' ,'We live' and 'We prosper' and go on a tour of the Hall. 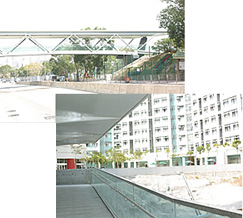 on , have been completed and will be occupied in early March. Three of these are for undergraduates (Halls 4, 5 and 6); one for postgraduates (Hall 8). There will be, as in Phase I, a multi-purpose hall for the four new buildings. The pedestrian bridge straddling , connecting the Student Hostels and the northern end of the campus, will be in service starting mid-March.