Founded in 1984, CityU turns 20 this year. "If a centenary marks the first cycle of a university's development, CityU is still on its way. We have fared well thus far, with tremendous achievements in our first 20 years," said Professor H K Chang, President, at the Staff New Year Party on 28 January, kicking off the 20th anniversary year. 2004 is a time to look back and rejoice in our achievements, and to look forward to the future with a new role statement.

Celebrating throughout the year
In mid-February, the President invited staff to contribute ideas for celebration activities, before 15 March, in line with the themes: 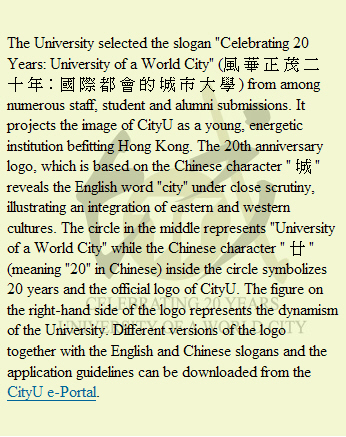 Preparation for the anniversary celebration started in August 2003 with the creation of the 20th Anniversary Steering Committee chaired by the President. The Committee, comprising 17 serving and retired staff members, initiated the planning of the celebration activities. Four working groups were established under the Committee to focus on: academic activities; sports/cultural/social service/promotional activities; publications and publicity; logistics and support. They are chaired by Professor Joseph Lai, Department of Physics and Materials Science; Professor Matthew Chen, Dean, Faculty of Humanities and Social Sciences; Professor C C Lee, Head, Department of English and Communication; and Mr K Y Wong, Director, Facilities Management Office, respectively.

In order to provide more time for preparation and to build up momentum, major anniversary events will take place in the latter half of the year. Given the stringent financial environment, the Steering Committee and Working Groups agreed that the celebration programmes be inexpensive but of quality and significance.

The past two decades witnessed the growth of CityU from a polytechnic on a temporary campus in Mongkok to a fledgling university on a permanent campus that covers about 15.6 hectares. The student population swelled to over 17,000, and CityU now has an alumni population of 60,000. The number of academic programmes expanded from 7 in 1984 to over 140 today, ranging from associate degrees to research degrees. CityU's first twenty years also saw the University firmly establish its reputation in basic and applied research over a wide spectrum of disciplines. "The 20th anniversary provides the University with an opportunity to trumpet its achievements and also to express its aspirations," said Professor Chang. "In a dignified manner, all staff, students, alumni and friends of CityU will join and celebrate this memorable year with joy and pride."