While most universities put their summer internship programmes on hold because of SARS, CityU has secured 348 job training placements in 112 companies in Hong Kong and the Mainland this year. The placements, for second-year students from three faculties, represent a significant increase over last year's 240 placements in 64 companies. Standard Chartered Bank, Sogo Hong Kong Co., Ltd and Maunsell Consultants Asia Ltd are among the new companies involved in the programme. 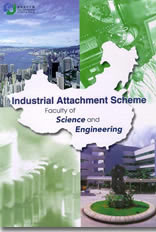 "Despite the special challenge we faced this year, we have secured 45% more internship places for our students over last year and, for the first time, expanded the programme to include students from other faculties," said Professor Roderick Wong, Dean of the Faculty of Science and Engineering (FSE), at the 29 May opening ceremony of this year's Industrial Attachment Scheme (IAS). "This is also the first year the scheme has crossed the border beyond Hong Kong and the Pearl River Delta (PRD) to other parts of China." Prof Wong's remarks were applauded by an audience of more than 400 at the function, which was organized by the FSE's Co-operative Education Centre (CEC).

The scheme officially began on 2 June, with some 80 students gathering with their luggage at University Circle at 7 that morning. After their temperatures were taken and all were given a clean bill of health, they loaded four tour buses and headed north across the border. About one third of the scheme's participants this year will be stationed on the Mainland throughout their 9-week internship.

Dr Paul Lam, from the Department of Biology and Chemistry and chairman of the Committee for IAS 2003, said CityU continued with the scheme, when most other universities suspended such summer activities, because the students really wanted to go. He remembered that some students, who showed signs of fever, asked to have their temperatures taken more than once before setting off for interviews

This is their last summer for internship before leaving school," said Dr Lam. "We could not simply cancel it, although it would have been much easier. That's why a lot of teachers and staff don't mind working extra hard on the project," he added. One of the key elements in the success of our IAS programme is that the teachers conduct three on-site visits for each student, noted Dr Lam. "This practice encourages the students to do their best and raises the companies" confidence in the programme."OThe excellent performance of the scheme's participants over the past three years has been a major reason for its success again this year."

"Although the spread of SARS disease seems to have slowed, precautionary measures are still being taken, including wearing masks and taking body temperatures," said Mr Silas Foo, Laboratory Manager of the Faculty's CEC. The Centre chartered buses to take them to PRD companies and factories. Buses also pick up the students each Saturday and take them home for the weekends.

OThe students went for interviews in the PRD region. They could see that most companies adopted stringent measures to prevent the spread of SARS. They could also see that the risk of contracting SARS in China is no greater than it is in Hong Kong," said Foo.

Launched in 2000, the FSE's Industrial Attachment Scheme aims to enhance the out-of-classroom learning experience for students and to foster closer ties with industrial partners.