A research project led by Professor Ron Hui, Chair Professor in City University's Department of Electronic Engineering (EE), has made a major breakthrough technological in developing the world's first two-wired dimmable electronic ballast. The project received a US patent in November 2002.

A research project led by Professor Ron Hui, Chair Professor in City University's Department of Electronic Engineering (EE), has made a major breakthrough technological in developing the world's first two-wired dimmable electronic ballast. The project received a US patent in November 2002.

"With this patented technology, we achieve the double merits of saving energy and eye-care," said Professor Hui on 25 February, as he demonstrated the breakthrough technology at a CityU conference room where the electronic ballasts are used. Classrooms, lecture theatres and conference rooms at CityU have gradually adopted the patented dimmable technology. Professor Hui said that, with the installation of the energy saving lighting device, for every percent of electricity saved, the University will save up to HK$400,000 in its annual electricity bill. 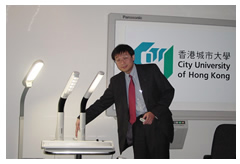 In the case of household fluorescent lamps, when brightness is dimmed energy consumption is reduced but energy loss at the ballast is increased, said Professor Hui. With his ballast, energy consumption by both lamp and ballast drops when brightness is decreased. The patented electronic ballast allows the light to be dimmed and at the same time eliminates flickering, thus achieving the double merits of saving energy and reducing eyestrain.

A CityU subsidiary enterprise, e.Energy Technology Ltd, has succeeded in transferring the patented technology to a commercial product, Smart Dim, a HK$399 dimmable desk lamp now available in a number of chain stores in Hong Kong. e.Energy is now seeking to expand its market and production scale through a licensing arrangement, and has started negotiations with a number of potential manufacturers. Meanwhile, CityU's Technology Transfer Office (TTO) is handling applications for patents in China's mainland and Europe. 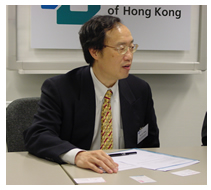 Speaking to the media on the applications of CityU's patents, TTO Director Mr H Y Wong said that, to date, TTO has successfully registered a dozen patents for CityU researchers, including Professor Hui's dimmable lamp. For each case of the successful transfer of patent technology to industry, 30% of the income generated will be awarded to the researchers in charge, in recognition of their work and to encourage further research. With an annual budget of HK$2 million for patent applications, the TTO is currently handling some 50 applications. The University has set up a committee on intellectual property to advise and review projects for patent application. 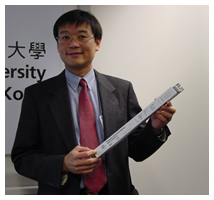 Professor Hui obtained his BSc in Electrical and Electronic Engineering from the University of Birmingham in 1984, and his PhD degree from the Imperial College of Science and Technology, University of London, in 1987. He received a CityU 1998/1999 Teaching Excellence Award and, with EE colleagues Dr Henry Chung and Dr Wei Yan, the Grand Prize at CityU's Third Applied Research Excellence Awards in 2001. e.Energy was awarded a Hong Kong Science and Technology Parks Technological Achievement Award at the 2001 Hong Kong Awards for Industry. Professor Hui was elected Fellow of the IEEE in 2003.