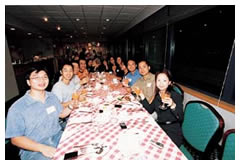 In a festive and jubilant mood, more than 250 alumni came home to CityU to mingle with each other, catch up with their professors and mentors and, above all, learn more about the latest developments at their alma mater.

The first ever reunion of this kind held on campus, the event was organized on three consecutive evenings on 24 to 26 September. In welcoming his fellow alumni to the function, Mr Patrick Lee, Chairman of the City University of Hong Kong Alumni Association, said, "Our aim is to build up stronger ties among the alumni in support of University development." Under new leadership, the Association has organized in 2002 a series of activities: a mini summer retreat/camp and an "early bird" stay-over at the new student hostels in late August, before they opened to the students. 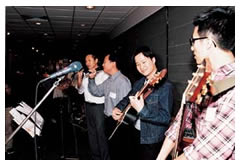 The reunion kicked off on the first evening with a toast to the participants and some singing performances and entertainment by alumni. The second and third evenings featured a talk by Professor Anthony Cheung of the Department of Public and Social Administration and Dr Y C Chan of the Department of Management Sciences on, respectively, "How to cope with turbulent times?" and "When will there be an economic recovery in Hong Kong?" "Happy Gatherings" was co-organized by the Alumni Association and the University's Alumni Affairs and Development Office (now renamed Development and Alumni Affairs Office). 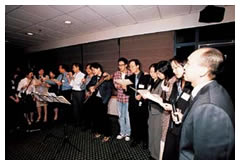 Before making a toast, Professor Y S Wong , formerly Vice-President of Institutional Advancement, said alumni are the University's important assets. He then gave a brief but spirited report on the University's latest developments, both in the improvement of its academic profile and the physical environment. He said, with a number of new building projects either approved by the Government or on the drawing board, the University will in five or six years look "significantly different" from today. Both he and Mr Lee invited alumni to return to the campus as frequently as possible and stay in touch with the development of the University, through the Internet and other channels.