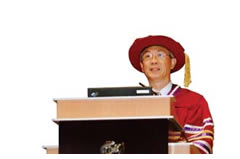 I am delighted to have the chance to say a few words on this happy occasion. First, let me congratulate all the graduates and extend a warm welcome to your family members and friends. Thank you for allowing my colleagues and me to share your joy and pride.

I am afraid anyone who was counting on me to deliver a lecture will be disappointed. Instead, I have decided to tell a story. I like to encourage students and others to learn about their cultural heritage. I believe this will enrich their lives. But the story I am going to tell today is not from the past. It is a fiction, based on what I think the future may hold for today's graduates.

My story takes place ten years from today. is sponsoring a huge reunion banquet and most of the graduates in this room are there. A computer has assigned seven former students and five serving or former staff members to your table. I am there along with you and six of your fellow graduates: Sunny Chan(

I ask everyone to describe what they have done since they left . Grace Ko begins. She says that when she got her BBA (Honours) in China Business, she expected to travel to the mainland but she never thought she would live there. She got a job with a investment company and, after two or three years, she started making business trips to the company's office. She did not like . It was cold in the winter and the people seemed cold too.

Gradually she got to know some people in the office. She enjoyed going out with them after work. To her great surprise, she found herself increasingly attached to . So she asked her company to move her to and her wish was fulfilled. When the Olympic Games were held in in 2008, she and some of her colleagues volunteered to act as interpreters for the foreign visitors. 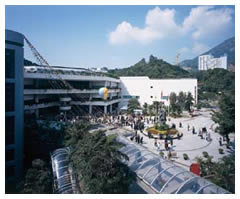 Now she has her own flat, which is huge by standards. She has lots of friends. She speaks Putonghua all the time and no longer even notices. The mainland is completely integrated into the World Trade Organization and business is booming. She has had three promotions in the last four years.

Sunny Chan also lives in the mainland. Like Grace Ko, he did not expect to go there. When he was studying for his BEng (Honours) in Mechatronic Engineering, he participated in the Industrial Attachment Scheme and took up a summer placement with a hi-tech products company in the Pearl River Delta. Because of the experience and social maturity he acquired through the placement, the company offered him a training position upon graduation. After a few years, he married a woman from Sichuan Province whom he met when he first worked for the company. Almost at the same time, the company offered him a promotion and transferred him to Chengdu to work for a new facility that manufactures mobile videophones. He accepted despite his reluctance to move so far away from Hong Kong. Now Chengdu is his home and he has even learned to like the spicy Sichuan food.

Felix Li speaks next. He has an Associate of Science degree in Computer Studies. He graduated near the bottom of his class. His family sacrificed a lot to send him to university and he was determined to be a success. He spent several months searching for a job but could not find anything suitable. Then he saw an advertisement for a job with a company in Shanghai that wished to be listed in Hong Kong.

Felix's family came from Shanghai and he speaks the dialect and also Putonghua. That helped him get the job. He enjoys working for the company based in Shanghai and travels frequently between Hong Kong and Shanghai and has become a well-liked worker at both places.

Joy Ho travelled a different route. She moved to Melbourne with her family when she was twelve years old. When it was time to go to university, she decided to return to Hong Kong because the BA (Honours) in Creative Media at City University was exactly what she wanted. She lived with her grandparents in Hong Kong and planned to return to Melbourne after she graduated. But she was offered jobs in Hong Kong with a local film company and an Australian-based advertising company. She decided to stay and join the advertising company, where she later met her Australian husband, who was the creative director. They have now moved back to Australia and set up their own company, which produces multimedia presentations for corporate clients. Their second child is due next May.

Pearl Leung, who speaks next, is a lawyer. She got her Bachelor of Laws and Postgraduate Certificate in Laws at the University of Hong Kong. Then she joined a law firm and qualified as a solicitor. Every year, more of her work involved companies that were doing business in the Pearl River Delta region. She became interested in mainland law and joined City University's part-time Master of Laws programme in Chinese and Comparative Law.

Through her work and studies, Pearl learned how important it is for Hong Kong and mainland lawyers to understand each other's legal systems. She now works as a lawyer in the Guangzhou office of a Canadian insurance company. Her husband, whom she met at City University, speaks after Pearl.

Stanley Yu is the son of a construction manager who came to in the early 1970s. The elder Mr Yu loved so much and he was so proud of his work that he named his first son " ". also loves very much. He got a Higher Diploma in English for Professional Communication at in 1996 and worked for a financial company for three years. He liked his job but wanted to do something more satisfying. So he returned to and studied part-time for a BSc (Honours) in Computers in Education. He naturally made friends with other part-time students who had been working for several years. One of them was Pearl Leung, whom he married in 2004 after six years of courtship and romance.

Now he works in a secondary school. They have a five-year-old girl who lives in with . could also try to find a job in but he does not want to abandon his students in . So he usually travels between the two cities and spends the weekends in .

The experiences of these six people may not be typical of 's alumni but they are not unusual either. Now it is your turn to speak. What will you say about your life between today and the day of the reunion banquet in 2012? I will not try to guess.

I told you this story because I want you to understand that you cannot plot out your life's story and anything is possible. You are part of a vast, exciting country that is expected to advance rapidly in the next ten years. You can make your home anywhere in . You can stay in and help it remain the most advanced city in and the best city of the Pearl River Delta region. With hard work and determination you can succeed in anything you do and go anywhere you choose. The future is yours.

Wherever you go and whatever you do, I hope you will take some time out of your busy life to think about City University. Thank you for choosing to come here and for letting us try to help you make the most of your life. On behalf of all my colleagues, I wish you happiness and success.