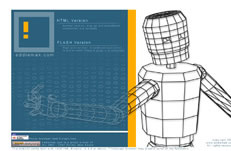 Ms Chiu Lai Fong, Ms Chow Mon Yu, Mr Lee Wing Lin and Mr Tsui Hou Ming, first year postgraduate students taking the MA in Communication and New Media Programme, won second place in the category of professionally assessed awards and the Most Creative award with their group project Games to Enliven a Wedding Banquet, which gives ideas on games to play with newlyweds at their wedding banquets. (See www.rthk.org.hk/elearning/mmgallery2002/) They garnered a total of $15,000 in scholarships and software.

Eight participating universities from the mainland, Hong Kong , Taiwan , Singapore and Macau submitted a total of 64 works, which were assessed by a judging panel composed of IT professionals, including Legco member the Honourable Sin Chung-kai, the legislator representing the IT Functional Constituency. The winners received their awards at a ceremony on 28 August.

EN submitted 15 entries this year. Unfortunately, four sophisticated projects could not be judged because the organizer's server could not support certain interactive features such as CGI and ColdFusion databases. The department also competed last year and walked away with three of the five prizes. EN Associate Professor Dr Zhou He has served as a member of event's organizing committee for the past two years.