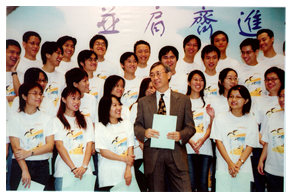 Video footage of the musical, City Legend, welcomed 4,500 full-time students to CityU from 26-28 August. Held at the Multi-purpose Sports Hall, the welcoming festivities were part of a number of orientation activities for the undergraduate and associate degree freshmen at CityU this year. 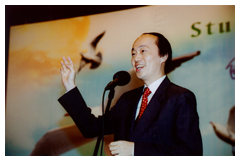 President H K Chang, Vice-President (Education) Professor Edmond Ko and Student Union President Mr Sunny Wong all welcomed the new students. "You should have a sense of pride in your own culture," said Professor Chang, who encouraged the newcomers to learn more about Chinese civilization and to improve their English as well. He said that of all cities in the world, contains the highest proportion of people who can master both Chinese and English.

"Bilingualism is the edge by which maintains its position amidst global competition," he said.

Meanwhile, Professor Ko compared CityU to a gold mine. These treasures, such as overseas study and cultural exchange opportunities, Executive Mentoring Scheme and numerous scholarships, are 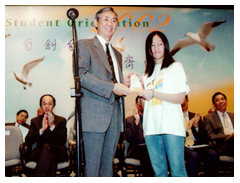 varied--but time is limited, he added. Professor Ko then advised students on the rules of the treasure hunt: be proactive, set your goals, and be disciplined.