Rewards for high public office in Asia: a comparative study

A comparative study of the rewards for high public office in has come up with some interesting findings, including the fact that the prime minister of is paid over 500,000 times more than 's president. " also ranks high — second after ," said Dr Grace Lee, Associate Professor in the Department of Public and Social Administration. Dr Lee conducted the study, which aims to shed light on the causes and consequences of different reward patterns, in collaboration with Professor Christopher Hood, Gladstone Professor of Political Institutions at All Souls College at the University of Oxford, and Professor Guy Peters, Maurice Falk Professor of American Government at the University of Pittsburgh.

The study covered the period between 1980 and 2000 in , , , , and , with the assistance of the other six scholars from the political systems in the study. It aims to explore three propositions about the causes and consequences of different levels and tructures of reward for high public office: the link between the level of rewards and corruption, economic performance, and democratic scrutiny.

"The issue of how to reward those in the topmost offices of a political system - judges, top bureaucrats and politicians - is a central and recurring preoccupation of political theory and institutional design everywhere," said Dr Lee. 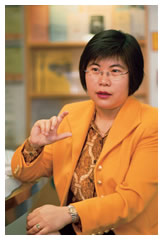 The widespread pattern of erosion in pay for high public office that has been noted in many western democracies does not apply widely to political systems in the Asia Pacific rim. There was only a modest drop in and after the 1997 Asian financial crisis. The overall pattern is one of accretion rather than erosion, Dr Lee said.

The generous perks and benefits enjoyed by 's top bureaucrats originated as colonial privileges that were gradually extended to local civil servants, she explained. The civil service pay determination mechanism, which reflects the pay trend in the private sector, also accounts for the high rewards for high public office in the last 20 years.

But democratic scrutiny is beginning to have an impact in since the transfer of sovereignty. "In fact, one of the important findings in our study is that the quality of democracy has an impact on the level and structure of rewards," Dr Lee said. As society scrutinizes, and becomes increasingly vocal about, rewards, governments have to respond. In , the government has cut back on some civil service benefits and introduced proposals to reform pay policy and system.

The findings of the study will form part of the publication, Reward for High Public Office: and , which will be published by Routledge in early 2003.

Dr Lee is currently working with two colleagues, Professor Martin Painter and Dr Joan Leung, on a research project to examine the policy capacities (decisiveness, resoluteness, coherence, appropriateness and public regard) of political executives in and . This time, they will move from pay and reward to the capability of the people holding high public office.