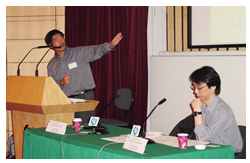 Two CityU researchers have demarcated the poverty line for Hong Kong, urging the Government to establish a minimum wage standard for its employees and those who perform its contracted services.

Dr Wong Hung and Mr Lee Kim Ming, lecturers in the Division of Social Studies, released the findings of their government sponsored research project, "Study of Hong Kong Poverty Line", which they conducted from September 1999 to January 2001. Basing their analysis on a survey on 3,086 low-income households they concluded that a monthly expenditure of HK$3,750 per head demarcates what they called the "Basic Living Protection Line". 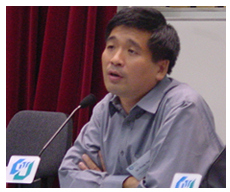 As many as 28% of the population, or 449,000 Hong Kong households, are categorized as poor. The poorest among the poor spend less than $24 per person on daily food consumption. Many do not switch on the lights and, when necessary, avoid taking even the cheapest means of transportation -- buses. Some cannot afford sufficient food or medicine when they get ill. "The situation is alarming and is likely to continue, or deteriorate, given the economic environment," DR Wong said.

Popular belief is that poor households are totally reliant on public assistance. But the study's findings reveal that almost 60 % of the poor are not on the recipient list of any social assistance scheme, and 75% have at least one working family member. "They are the working poor. In fact, some work hard but wages have been cut so severely that no matter how hard one works, he or she never gets basic ends met," DR Wong said.

The researchers urged the Government to take the lead in allaying the situation of rapidly declining wages among low-income workers. "The plunge in wages has been most severe among workers of government contracted services. That sets a vicious downward adjustment on the private sector," DR Wong said, "It's time the Government took the lead to protect basic living."

They proposed that the Government set up a basic living wage system for its employees and those of its contracted services, at a minimum monthly rate of $6,600, a daily rate of $250 or an hourly rate of $32.