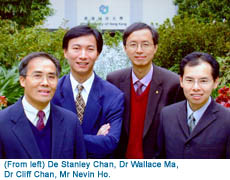 In another milestone in its development, CityU is the first local institution of higher education to foster a technology company from start-up to public listing. TeleEye Holdings Ltd plans to make a public offer and placing of 50 million new shares, representing 27.8% of the shareholding, on Hong Kong's Growth Enterprise Market. Of the total, 42 million shares are earmarked for a placing and eight million shares will be offered for public subscription.

With TeleEye shares offered and placed at $0.6 a share, the net proceeds are expected to be $23 million, earmarked for establishing a global sales network and expanding research and development.

The University held a press conference on 23 April to announce its plan to seek the IP". Professor P S Chung, Vice-President (Research) said "The public listing of TeleEye represents a first for City University of Hong Kong--but it will certainly not be the last." At least 15 other incubation projects are in various stages of development at CityU and Professor Chung said he is confident that they will see the same success. 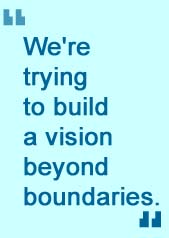 Dr Cliff Chan, former professor in the Department of Electronic Engineering and now CE" of TeleEye, gave a talk in the Multi-media Conference Room on 24 April on his vision and experiences in running a technology start-up. "I worked at CityU for more than 15 years, a third of my life," Dr Chan said, "so being back here today has a special meaning for me."

TeleEye was founded in 1994, with a loan of $500 from the University and $500 put up by the founders. A further loan of $300,000 soon followed, again matched by the founders. "Tt's a very small sum to start a company," Dr Chan laughed, "Even a newspaper stand in a corner of Mongkok would cost more than that!"

The first product developed by the fledgling company--speech accessory for a modem--as a technological success but a marketing failure. Fortunately, they had at the same time developed TeleEye, and this system was luckier. "Even when we were working on the prototype we had someone so interested he paid a deposit on it, so we really felt we were on to something big."

Unique remote monitoring system
The beauty of TeleEye is that it is a remote monitoring system which helps people to manage their operations from a distance. Those business users who have several places of operation--factories in the mainland and other parts of Southeast Asia, for example--find TeleEye particularly useful because they can see what's going on in different parts of their warehouses, shops or factories. And they are also wealthy, Dr Chan added, which means TeleEye can be sold at a reasonable price. "In just two years we repaid all our loans and, to date, have paid out more than $5 million in dividends."

As a monitoring system, TeleEye is unique in that it has the world's fastest video transmitters. It also boasts a range of 18 models of transmitters with application software in nine languages. With the phone line system basically targeted to business users' shops, factories, banks, etc--he company started something new: live video on web pages.

Cyber TeleEye and TeleEye III (web-based video monitoring and network-based video transmitters, respectively) have applications in intelligent buildings, traffic monitoring, e-commerce and e-promotion. Target customers are all home users and the general public. In fact, Dr Chan said, these products have already been sold to a major local property developer, in a joint project with another CityU company, e.Energy Technology Ltd, to control around 200 buildings in Hong Kong.

Eye on the future

Always happy with a challenge, Dr Chan said the company is now working on developing live video for mobile devices. "Even when they're on the road, people will be able to manage their businesses through their PDAs." In around a year's time, they expect to have software for mobile phones, too, although this will have to wait for 3G wireless communications. "There is potentially a huge market for remote management, m-commerce and m-marketing," Dr Chan said, "And we're working on adapting our compression technology to all those different conductivities. We'll build features for the applications later on." Dr Chan believes TeleEye has a niche in the market because it is a leading developer of signal processing technology and has a product line that has many different applications. "Technology and brandname are the tools we use to protect our market-- and we're worked to make TeleEye a well-established name." Customers include HSBC, British Airways (UK), Hutchison Global Crossing and the mainland's Custom and Excise Department. 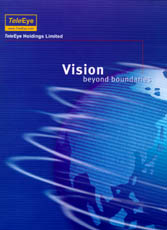 "We have a very strong R&D section--bout one-third of the company. In fact, we concentrate on only two areas: product development and marketing. Everything else we contract out," Dr Chan explained. With a current distribution network in more than 25 countries and a healthy net profit margin, after the company is listed the extra funds will go into increasing product volume and pushing net profits up further. Offices will be set up in Tokyo, London, Singapore and China's mainland to strengthen the TeleEye brandname and promote the company's products.

"We're trying to build a vision beyond boundaries. We're the first company from local universities to be listed, so I hope you will all be proud of CityU and work together to make it even better."