The "age wave" has already hit Hong Kong. Government statistics show that the population ratio of those who are aged 65 and above, currently 11%, will rise rapidly. The average life span will also be considerably extended. Most people will probably have 10 or even 20 more years to live after retirement, assuming the retiring age to be 60. These two demographic changes in combination are set to have a profound impact upon individuals, families and society. 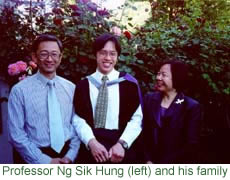 Rediscovering and finding a place in society for the elderly has become a major research focus for Professor Ng Sik Hung, the new Head and Chair Professor of the Department of Applied Social Studies. Professor Ng joined CityU last December, from the Victoria University of Wellington.

Geriatrics in the medical field has traditionally focused on negative aspects of ageing, such as senile dementia and diabetes. These are worthy areas of research. Unfortunately, "ageing" has become associated with illness and the decline of bodily functions. But, according to Professor Ng, research has revealed that the majority of elderly people are healthy and normal, and only a minority is unwell. "Helping people to feel positive about their ripe years is perhaps the most important contribution of social gerontology, apart from contributing to the understanding of the elderly from social, psychological and economic perspectives," he said.

Thanks to the general raising of education standards, as well as improvements in medical technology, living environment and food quality, elderly people nowadays are much more capable of leading a full and independent life than before. "Many stereotypes of old age are no longer applicable," Professor Ng said. For instance, the perception that people's working ability would go downhill after the age of 60 does not apply in the knowledge economy--it belonged to the era of the industrial economy. Another misperception is that the elderly lead a rather empty, de-sexed and lonely life. Against "the-light-is-out" stereotype, many elderly people are in fact still enjoying lives that are rich and emotionally rewarding.

Breaking the negative stereotypes
Professor Ng believes that the out-dated, negative stereotypes about ageing not only lead to society underestimating the potential of elderly people; they could be detrimental in other aspects. A very serious consequence of the "problematization" of the elderly is the preoccupation with "problem elderly" while neglecting to provide adequate resources and opportunities for the large numbers of healthy elderly to reach their maximum potential. This could be a big loss to society in the long run. "How can a society remain competitive internationally when it wastes a significant proportion of its human capital?" he warned. Another consequence is that people suffer unnecessary psychological pressure as they grow old and even fall victim to the "self-handicapping effect" of the ageing stereotype, which is detrimental to their psychological well-being and interpersonal relationships.

"Life is in fact an ageing process. Chronological age is merely a number, not an invariant yardstick of the ageing process. We should therefore embrace ageing with the same enthusiasm as we embrace life itself," Professor Ng believes.

"Hong Kong is my home"
Professor Ng completed his secondary and tertiary education in Hong Kong, then studied for his PhD in Social Psychology at the University of Bristol in the UK. In 1976, he was appointed Lecturer at the University of Otago, New Zealand. Sixteen years later he took up a Chair in Psychology at the Victoria University of Wellington and headed the Department of Psychology. In 1996, he was made Fellow of the Royal Society of New Zealand. After being away from Hong Kong for more than 20 years, what brought him back?

"It was a matter of opportunity and coincidence, not purely a rational choice or planning," he said.  After all, in my heart, Hong Kong has always been my home. In the last five years, my family and I have visited Hong Kong regularly. My work at Victoria University has been on the right track, the School of Psychology has become a top research school, and everything seemed plain sailing. It was time for me to think about what new contributions I could make in the next five to 10 years." He had the chance to work and live in Hong Kong for seven months in 1997, using his sabbatical leave as a visiting professor at the Chinese University of Hong Kong. Professor Ng is indeed no stranger to Hong Kong.

The chance to meet talented people from a wide variety of backgrounds is another factor that attracted Professor Ng back home. "CityU has a strong portfolio of talented chair professors from Hong Kong, mainland China, North America and Europe. I am excited about the prospect that there is much I can learn from them."

As Head of the Department of Applied Social Studies, Professor Ng has great expectations of the Department. It has a unique organizational structure, comprising psychology, social work and sociology. He thinks there is ample opportunity to integrate the three sections to make the whole greater than the sum of its parts. There is considerable scope for developing the scholarship of integration, by integrating across disciplines, and integrating practice with research. He is also keen on fostering a culture of high quality and programmatic research by consolidating the Department's existing research strength in ageing and family into a research centre, in parallel development with the Southeast Asian Research Centre, the Quality Evaluation Centre and the Youth Studies Net.

With regard to curriculum reform, Professor Ng is keen to facilitate the Department's on-going efforts to introduce a generic BSocSc (Hons) degree that will give students a well-round understanding of social sciences, before they specialize, whether it be Social Work, East Asian or Southeast Asian Studies, Psychology and Human Relationship or Youth in the Cyber Era.