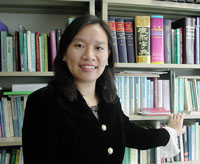 “Translating legal precedents from the mainland has been such a lonely endeavour. Now I feel my efforts are being recognized and hope that more people will give their support,” said Dr Priscilla Leung, Associate Professor in the , who has been chosen as one of the Ten Outstanding Young Persons by the Hong Kong Junior Chamber of Commerce this year.

Dr Leung attributed the award to her persistent efforts over the last decade to foster understanding of 's legal system. In 1992, she gained support from the Supreme People’s Court of China, the Senior Judges Training Centre and the People's to publish the China Law Reports series in English. The first set of the series consisted of three volumes and recorded 346 cases of precedents at various levels of courts in . It was regarded as a milestone project, which enabled legal practitioners from the West, who are accustomed to the vastly different Common Law system, to gain a better understanding of the legal system in .

The first set of the China Law Reports series was financed by a $2 million fund, raised by Dr Leung and a number of legal practitioners in . The project was well received and when she started work on the second set in 1995, CityU offered her financial support. Now Dr Leung has embarked on the third set and a web-based version of the series, with support from external funding. In addition to court precedents, supplementary information on the legal system in will also be provided on the web.

Dr Leung's contribution in bridging the gap between legal systems of and extends beyond publications. Through her close links with the People’s University, where she received her doctoral degree in basic law, she helped found the Master of Laws in Chinese and Comparative Law (LLM) programme at CityU in 1995. In the past few years, she has led numerous academic exchange delegations to the mainland. She has also hosted a television programme introducing basic law in , which was broadcast by a television channel. Currently she hosts a daily programme on Chinese laws for ATV in .

After all this effort, Dr Leung said she is glad to see that people are now showing more interest in, and understanding of, the legal system in China. “I hope what I am doing can be of help to 's entry to the WTO. The road to making Chinese laws comprehensible to the West is long and difficult; I am just at the starting point,” she said.