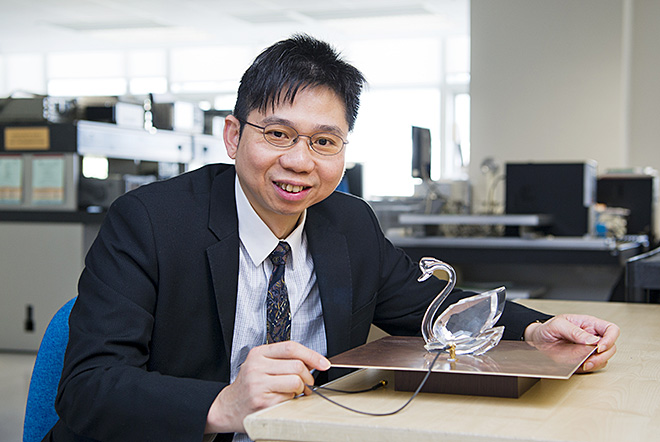 Professor Leung presents his antenna in the shape of a glass swan.
It might be the most beautiful antenna in the world: a glass swan that would not look out of place as a decoration in someone’s home. But this elegantly shaped ornament is actually a powerful antenna that can be used for wireless communications.
Not only that, this project has helped one of the leading scientists at CityU University of Hong Kong (CityU) to receive the highly prestigious First Class Award (Natural Science) in the 2016 Higher Education Outstanding Scientific Research Output Awards (Science and Technology) of the Ministry of Education, China.
Professor Ben Leung Kwok-wa, Chair Professor in the Department of Electronic Engineering (EE) and a member of the State Key Laboratory of Millimeter Waves, is internationally acknowledged for his work in dielectric resonator antenna (DRA). He was the first researcher to carry out a full-wave analysis of DRA and the first to show that DRAs can be fabricated with glass (Pyrex).
“DRA has received a lot of attention over the past two decades because it is small, light and easy to excite,” said Professor Leung, who has been the first winner of the First Class Award for the microwave category in this particular set of awards since 2013.
No one has quite reached the standard required of late but Professor Leung’s work has impressed the organisers, especially his pioneering work using Pyrex as an antenna. 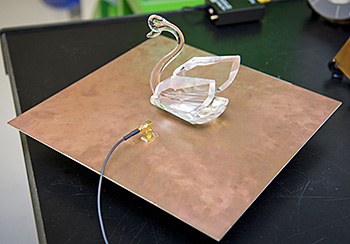 Few people thought glass could be used as an antenna.
“The swan works like any other antenna, radiating electromagnetic fields for wireless transmission of, for example, a DVD signal,” Professor Leung explained. “Previously a metal patch would have been placed on the glass to serve as the antenna. But our innovation is to use just the glass as the antenna, an idea few people believed in when I first started researching it.”
The glass swan was bought cheaply over the internet, and Professor Leung has experimented with different shapes and chose the swan simply for aesthetics.
“It’s beautiful to look at and would look great in someone’s living room,” he said.
In addition, Professor Leung and his collaborator, Professor Pan Yongmei of South China University of Technology and a former post-doc working under Professor Leung, developed dual function DRA that can be used as lamps as well as antennas. This idea combines the lighting and antenna systems into one.
The next challenge is to find even lighter transparent material and work on establishing antennas with multi-bands to widen the range of applications.
These endeavours will be particularly useful for devices to be used for global positioning systems and personal communications systems for mobile technologies, Professor Leung said.
Since glass is commonly found in our daily life, there are many potential applications. “We are limited only by our imaginations,” he said.
Professor Leung was editor-in-chief of IEEE Transactions of Antennas and Propagation from 2013 to 2016. He was the first ethnically Chinese person to hold the position since the journal was founded in 1952, and also the first who was appointed from Asia.
Professor Leung received his BSc in electronics and PhD in electronic engineering from The Chinese University of Hong Kong, Hong Kong in 1990 and 1993, respectively. He joined CityU’s Department of Electronic Engineering in 1994.
He said that he was very grateful to Professor Chan Chi-hou and Professor Luk Kwai-man of EE for all their support over the years, and to his colleagues, students, and CityU for enabling him to conduct his research projects.