​Artificial leaves that can convert carbon dioxide into fuels to tackle global warming have been developed by scientists at City University of Hong Kong (CityU) in partnership with international colleagues. 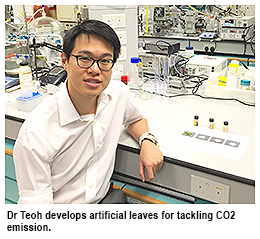 Dr Wey Yang Teoh, Associate Professor in the School of Energy and Environment at CityU, and Dr Alex Chi Kin Yip, Senior Lecturer in the Department of Chemical and Process Engineering at the University of Canterbury, New Zealand, are Principal Investigators of the project entitled “Decorating Artificial TiO2 Leaves for Effective Carbon Dioxide Capture and Usage”.

The project, which has received support from the prestigious Royal Society of New Zealand, will provide practical solutions in tackling the problems of excessive carbon dioxide emissions.

Global warming caused by greenhouse gases, predominantly carbon dioxide, will be the most threatening issue facing us in this century.

By replicating the structure of natural leaves, the team produced the titanium dioxide (TiO2) artificial leaves, which can be used as a platform to convert carbon dioxide into precious chemicals using sunlight and water.

“We believe that sustainable carbon dioxide capturing and conversion into valuable products such as formic acid, methanol and methane are viable pathways in dealing with carbon dioxide emission,” said Dr Teoh, who pointed out that the United Nations climate summit in Paris last December had set a target of limiting global warming to below 2°C above pre-industrial times.

The project holds great promise because it was driven mainly by sunlight and water, both are sustainable and renewable resources, he added.

The next stage of the research is to attach various in-house developed catalysts onto the artificial leaves as a way of controlling the selectivity of the carbon dioxide conversion products, the team added.

Dr Teoh and Dr Yip are key members of the Joint Laboratory for Energy and Environment Catalysis at CityU. Other members are from Australia, Spain, the United States and Germany. The lab is dedicated to advancing globally important reactions such as the production of clean hydrogen, biomass conversion, the destruction of carcinogenic compounds in drinking water and tackling air pollution.