Groundbreaking development in new aerospace material by CityU and NJUST

​An advanced material developed by City University of Hong Kong (CityU) and Nanjing University of Science and Technology (NJUST) holds great promise for the aerospace industry.

The new material’s chief quality is its enhanced capacity for heat resistance, its high tensile strength, and its low density. The new material can withstand temperatures of up to 900°C. It could replace the use of Ni-based superalloys. 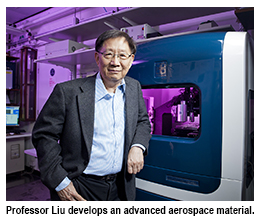 The team is led by Professor Liu Chain-tsuan, University Distinguished Professor at CityU, and Professor Chen Guang from NJUST. The new alloy marks a milestone in the career of Professor Liu, an area that he has focused on during his academic research.

The new titanium-aluminum nickel-base (TiAl+Nb) single crystal alloy created by the team can be used in the turbine engine of an airplane. It not only boosts the efficacy of an airplane, it significantly reduces noise and environmental pollution.

“Over the past 20 years, the industry could not produce the TiAl+Nb single crystal alloy at a low cost. We have achieved a groundbreaking development in material research. Our new material could be used for turbine blades and widely applicable in the aerospace manufacturing in the future,” Professor Liu said.

The new material is important to this industry because of its heat resistance. When an airplane’s turbine engine turns, it produces extremely high temperatures and uses a lot of fuel.

Professor Liu’s achievement has attracted much attention in academic circles and has been published as a cover story in the internationally acclaimed journal Nature Materials.

The titanium-aluminum alloy used today was already a light-weight material that could withstand up to only 700°C. But it cannot be used in the centre of a turbine engine where temperatures can hit 1,000 ºC.

He added that titanium-aluminum alloy is already much better than the nickel-base super alloy developed in the last century because it can reduce the weight of an airplane’s engine by 400 pounds, lower energy losses by 15%, and cut noise and gas emissions by 50%.