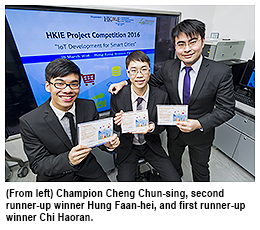 One MPhil and two PhD students from the Department of Electronic Engineering (EE) at City University of Hong Kong (CityU) won the top three awards in a competition organised by the Electronic Division of the Hong Kong Institute of Engineers (HKIE) for electronic technologies that can boost energy efficiency and development of a smart city.

Cheng Chun-sing, an MPhil student in EE, won with his project “Smart Battery Health Monitoring and Diagnostic System” in the HKIE Project Competition 2016 with the theme “IoT Development for Smart Cities”. His project can more accurately diagnose the conditions of a battery and reduce maintenance and replacement costs.

Chi Haoran, a PhD student in EE, won the first runner-up with a project that can improve indoor air quality by optimising vent design and ventilation control management. Hung Faan-hei, another PhD student in EE, received the second runner-up prize for setting the locations for warehouse items by using ZigBee technology. 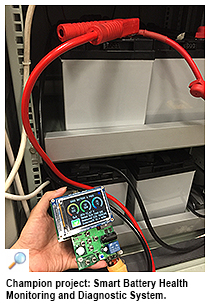 Cheng Chun-sing said intelligent use of energy was very important for the development of a smart city due to the rising demand for energy. His winning system can accurately and efficiently provide complete information about a battery, such as its state of charge and state of health. Users can then accurately estimate the performance of the battery with less time for checking, lower maintenance and replacement costs and extended battery life.

“My system can upload the information of a battery onto cloud or database servers, which can allow remote monitoring of the battery conditions. Therefore, it will be welcomed by large data centres using an uninterruptible power system, as it can ensure protection from abnormal performance of electric grid and save more on costs for checking batteries,” he added. 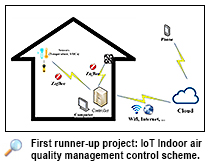 Chi Haoran developed a system that uses artificial intelligence technology to perform real-time monitoring of the air quality of ventilation systems. “Hong Kong people usually spend more time indoors than outdoors. However, it has been found that volatile organic compounds in the air of a room have adverse effects on health,” he said.

“After considering the area of a room and outdoor environmental factors such as temperature, atmospheric pressure and ventilation speed, we set vents at two best locations in the room to provide fresh air to mitigate the emission of volatile organic compounds indoors,” he explained.

“My real-time control system can immediately adjust the effect of ventilation according to indoor and outdoor temperatures, humidity and densities of volatile organic compounds. Therefore, the system not only improves the air quality and creates a comfortable environment, but also saves energy,” he said.

The system is equipped with a mobile app that enables technicians to check the ventilation conditions by reading the real-time data on cloud or data banks. 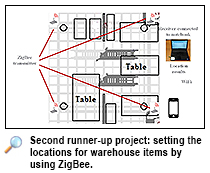 For his second runner-up project, Hung Faan-hei uses wireless technology for localising warehouse items and identifying them. He said wireless technology had been well developed in major cities, but it was not widely applied to localisation for goods. Its applications in the logistics industry would surely help the development of a smart city, he said.

His system uses ZigBee wireless technology to transmit and receive signals, as it covers a larger area than blue tooth with less power consumption than WiFi at a lower cost. “The most difficult part for setting locations is to ensure accuracy. My system identifies the best locations for goods by clustering technique and optimisation through a computer application,” the award-winning student said.

The system also uses Near Field Communication (NFC) technology for identification of the item codes of goods.

The HKIE competition aims to enhance the public’s understanding of the technologies for the Internet of Things (IoT), and encourage engineers and students to apply technologies for improving the quality of life.