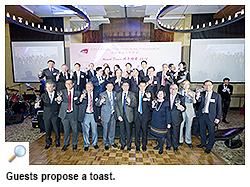 City University of Hong Kong Foundation (CityU Foundation) held its inaugural annual dinner on 26 November to thank donors and friends for their support to the University.

More than 200 guests participated in the annual dinner, held under the theme “Together We Make a Difference”. The event featured the first performance of Professor Way Kuo, CityU President, and Mr Herman Hu Shao-ming, Council Chairman, as a fashion model and singer to coincide with the theme.

The $2.36 million in donations that CityU received that evening will be used for a seed fund that will support CityU students aspiring to start their own businesses. 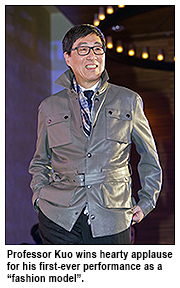 Mr Hu said in his welcoming remarks that the dinner, coinciding with Thanksgiving Day in the US, was a special opportunity to thank donors and friends for their longstanding support over the years.

Although the CityU Foundation was only established last year, CityU had already made significant advancement in a range of disciplines, Mr Hu said, adding that he hoped the Foundation would continue to promote academic and research developments.

Professor Kuo said he was grateful to all donors and supporters for helping the University advance, recruit talented faculty from around the world, enhance the quality of teaching and research, and help CityU become a leading university.

Professor Kuo presented certificates to three of the honorary patrons who attended the dinner in recognition of their contributions to the University. They were Mr Hu, who is also Honorary Chairperson of CityU Foundation, Mr Lau Ming-wai, Member of the Council of CityU and Mr Yeung Kin-man, Member of the Board of Governors of the Foundation. 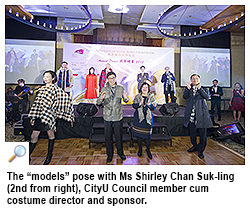 Shortly after the dinner began, the lighting in the ballroom was dimmed and a live band featuring two CityU student violinists began to play.

The door of the ballroom opened slowly and Professor Kuo was the first to enter, wearing a grey leather jacket as he paraded around the tables and on the stage. His “catwalk” performance won him big cheers and applause. 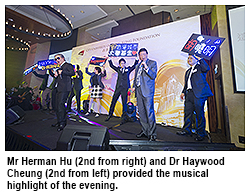 So convincing were they, each of the “models” received a hearty round of applause upon entering the stage.

In addition, Mr Hu and Dr Haywood Cheung Tak-hay, Honorary Vice-President of CityU Foundation and a CityU alumnus, were greeted enthusiastically when they sang “My Broken Heart” and “My Prayer”, respectively.

The highlight of the evening was their duet “The Trap of Love”, which prompted cries of “Encore!” from the glow-stick-waving audience. The singers received full bouquets for their vocal efforts. 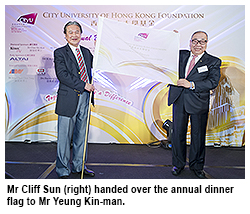 Mr Cliff Sun Kai-lit, Chairman of the Organising Committee of CityU Foundation Annual Dinner 2015, gave a vote of thanks to the guests, saying that during the organising of the dinner, he experienced first-hand that CityU was a fast-growing, world-renowned university.

He said he also witnessed the deep affection and enthusiasm of prominent leaders and alumni for CityU, and said he was deeply impressed by the way CityU drew support. He then handed over the flag for the annual dinner to Mr Yeung Kin-man, the Chairman of the next Organising Committee.