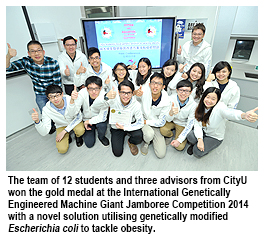 A novel solution utilising genetically modified Escherichia coli (E. coli) to tackle obesity has won a student team from City University of Hong Kong (CityU) the gold medal at the International Genetically Engineered Machine (iGEM) Giant Jamboree Competition 2014 in Boston, US.
The team of 12 CityU students competed with over 2,500 participants from 245 universities across 32 countries to win the top award. It was also CityU’s first ever participation in this competition.
Obesity is an increasingly common problem worldwide. It increases the risk of a long list of chronic conditions such as heart disease and diabetes, among others.
The CityU team comprising students from the Department of Biology and Chemistry (BCH) and the Department of Mechanical and Biomedical Engineering (MBE), and advisors from BCH and the Department of Biomedical Sciences (BMS), tackled this problem using a synthetic biology approach that builds DNA to create a biological system with new functions. 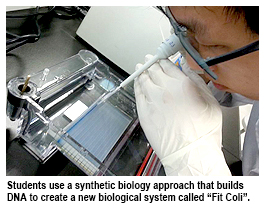 The team’s new biological system, called “Fit Coli”, helps people to stay healthy. The genetically modified E. coli could work inside the human gut, absorbing excess fatty acids at a rate six times more than for non-modified E. coli, and converting them into α-linolenic acid, known as ALA. This acid can further convert into docosahexaenoic acid, known as DHA, an omega-3-fatty acid that is useful for brain development, eye health, protecting the cardiovascular system, and enhancing the immune system.
In addition to tackling problems on the scientific front, the competition requires students to address ethics, sustainability, social justice, safety, security, intellectual property rights and promotion issues.
“We were overwhelmed with joy when we learnt that we had won a gold medal,” said Dr Richard Kong Yuen-chong, the principal advisor for the team and Associate Professor in BCH.
“The award is important recognition for the students’ creativity and months of hard work, and it is a good learning experience for discovery and innovation, which matches the theme of CityU’s Discovery-enriched Curriculum,” Dr Kong said. The other two advisors for the team were Dr David Chiu Sung-kay and Dr Terrence Lau Chi-kong, both assistant professors in BMS.
Students participating in the competition found the experience rewarding and eye-opening. It was exciting to have successfully created a new biological system by ourselves and get recognition, they reported.
Ada Yeung Sin-yu, a Year 3 MBE student, said, “I enjoyed the whole learning process. From identifying the obesity problem to overcoming difficulties during experiments, the whole process is student-oriented, while the advisors of the project provide us with useful guidance. We sincerely thank them for their guidance and support.”
Marco So Lok-man, a Year 3 BCH student, said, “Joining the competition is an eye-opening experience. I found that the research projects carried out by the Hong Kong teams are comparable with those overseas. It confirms my aspiration to enter the scientific research field in the future.”
Maria Li Lok-yee, a Year 3 BCH student, said they conducted talks and workshops for secondary school students to promote synthetic biology and their innovation. “I feel very happy that we could pass on our discovery and innovation to them,” she said.
Cas Choi Hiu-ying, a Year 3 BCH student, shared her ultimate target, “I hope Fit Coli can be used in humans to keep them healthy.”
iGEM is held annually in the US to encourage university students to solve real-world challenges by building genetically engineered biological systems. Participating teams have to consider and address the safety, security and environmental implications of their work.
The competition was first organised by Massachusetts Institute of Technology in 2004 and is celebrating its 10th anniversary this year.
For more information on the “Fit Coli” project, please visit: http://2014.igem.org/Team:CityU_HK.