Following hot on the heels of the Sustainability Summit at the end of last month, renewable energy was the subject of a City University Distinguished Lecture on 29 October at City University of Hong Kong (CityU). 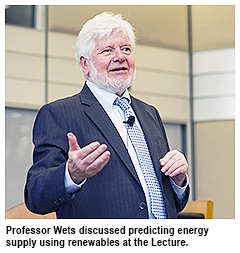 The speaker, Professor Roger J-B Wets, Distinguished Research Professor of Mathematics at the University of California, Davis, set about outlining for the audience the major mission of a System Operator in terms of the needs of governmental, para-governmental, independent stakeholders, whose primary goal is to avoid serious disruption to the supply of electricity through the management of the electricity-grid.

Traditionally, the next day’s electricity supply is calculated based on the use of highly controllable fuel sources such as gas, coal and nuclear. But in today’s world, there is a greater push to include sustainable energy supplies, which requires a radical re-think of how to predict the next day’s energy needs for a given community.

“This means the System Operator has to accommodate serious uncertainties in the supply since wind and solar power are both extremely variable, in time and place, and renders the dispatching management of the grid significantly more complex,” said Professor Wets, whose main research interests include stochastic optimisation and variational analysis. He has published widely in pure and applied mathematical journals, but also in journals dealing with probability, statistics, economics and ecology. 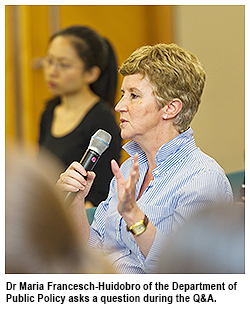 The crucial point in predicting the next day’s supply comes hours after contracts have been signed with suppliers, he said. After calculating the load forecast by assessing weather conditions forecast for the next day, and following the signing of the contract in the late afternoon, the System Operator has to check the reliability of the predicted energy needs.

However, now that many countries and regions are aiming at a policy where around 50% of the load would be generated by renewables, judging the reliability requires a great deal more complex analysis.

“It requires a radically redesigned approach that comes with some practical and interesting technical challenges,” Professor Wets said.

It is necessary to generate many, many different scenarios based on temperature predictions, humidity, cloud cover, wind as well as seasonal factors such as the season and even the time of days, and so forth.

“There are millions of possibilities such as that no machine is actually able to solve the problems,” he said, a comment which further highlighted the practical applications of the quantum computing ideas presented in the recent talk by Professor Andrew Yao Chi-Chih in terms of the speed of processing data.