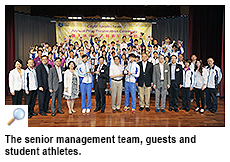 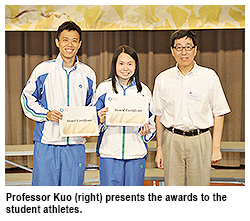 In addition, Grace Lau Mo-sheung, a student from the School of Creative Media, was named the USFHK Sportswoman of the Year, while nine CityU student athletes received the Most Valuable Player (MVP) Award in their respective sports events.
Awards and scholarships were presented to students during the ceremony, which was attended by the senior management and college representatives. These prizes included Outstanding Academic Award, Gold Medal Coach Award, Trainer Merit Award, Most Valuable Athlete Award, Most Dedicated Athlete Award, and Most Progressive Athlete Award. 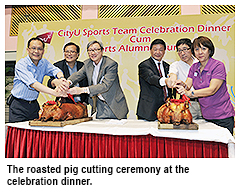 “Winning the overall championship for a record of 8 times is a remarkable achievement, and I hope students can scale new heights in the future to win the 9th and 10th overall championship,” said Mr Herman Hu Shao-ming, Chairman of CityU Council. He thanked the coaches and student athletes for giving such a special gift during CityU’s 30th anniversary this year.
“In 1994, only a few CityU students took part in one event at the USFHK competition, but now we have 32 teams participating in all events, winning many awards and, in particular, the overall championship,” said Professor Way Kuo, CityU President. He said CityU athletes excelled not only in sports events but also academic studies, a significant number of them have achieved a GPA of 3.0 or above.

“Our athletes not only have developed their physical strength and acquired different sports skills through their training and participation, they have also demonstrated their perseverance and self-discipline, and more importantly, their unbreakable team spirit which is the hall-mark of CityU Sports Teams,” said Professor Horace Ip Ho-shing, Vice-President (Student Affairs). “These are all attributes a professional should posses as well as qualities that employers expect of employees.”
140528-2_dinner_L.jpg 140530-1_sport_L.jpg 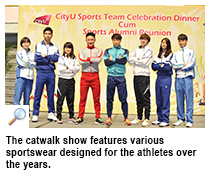 Around 700 donors, CityU senior management, staff, students and alumni joined a celebratory dinner after the ceremony. Before the dinner, Mr Hu and Professor Kuo officially opened the “Hall of Fame”, which displays photos of student athletes winning the USFHK overall championship in all grand slam years.
In addition, the athletes performed drumming and singing, and catwalk show on sportswear designed for them over the years.