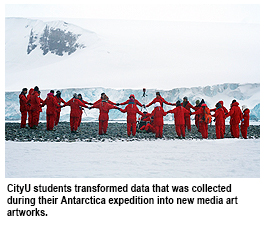 A team of students from City University of Hong Kong (CityU) trekked to Antarctica and transformed data that was collected during the expedition into new media art projects.
Opening on 23 May, an exhibition titled “Freeze Frame” will showcase the students’ projects.
The 13 installations, which span the academic spectrum, use emerging technologies such as immersive 3D, robotics and game applications to show the endangered continent from a new perspective. Even the emails sent by the students are included in the exhibition, interpreted by LED displays climbing each balcony in the Run Run Shaw Creative Media Centre, the iconic architectural landmark building at CityU.
Organised by the School of Creative Media, the groundbreaking Extreme Environments programme encourages interdisciplinary student teams of engineers and scientists to partner up with artists and designers. The Antarctica expedition was open to students from any field of study and the projects on display were selected by a team of scientists, artists and engineers.

The students’ hybrid art and science projects are a surprising mix of important environmental information and a playful use of new technologies.
For example, global warming’s effect on baby penguins is explained through a mobile application that borrows its style from retro Hong Kong newspapers. Microorganisms in the Antarctic water are displayed on an overhead dome and their DNA interpreted into music. Air pollution is revealed through a towering fabric and light installation.

Because the projects encourage creative expression of the science, the data became personalised and more Hong Kong influenced. In a 3D, 360-degree movie, Antarctica’s total lack of artificial light is contrasted with the world’s location with the most, i.e. Tsim Sha Tsui.  A dramatic kite-surfing performance in Antarctica was directed by a film student using seven cameras and two sensors to inspire an animation about Hong Kong’s wind-blocking “canyon effect”.
Where possible, the students sourced recycled or sustainable materials for their projects, and every piece will be recycled at the closing.
The opening ceremony will be officiated by Mr Herman Hu Shao-ming, CityU’s Council Chairman, Professor Way Kuo, University President, Professor Arthur Ellis, Provost and Professor Roderick Wong Sue-cheun, Vice-President (Development and External Relations).
Event: “Freeze Frame” – Extreme Environments: Antarctica
Time:   Exhibition Opening Gala: 23 May 2014 6:30 to 10pm
Exhibition: 24 May to 14 June, 2014, Mondays to Saturdays, 11am to 7pm
Free admission. All are welcome.
Venue:   Levels 1, 3, 8 and 9
Run Run Shaw Creative Media Centre
18 Tat Hong Avenue
Kowloon Tong, Hong Kong
Website: https://antarctica.scm.cityu.edu.hk