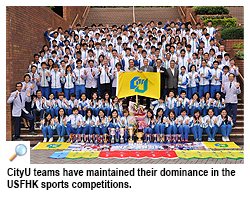 City University of Hong Kong (CityU) sports teams won the men’s and women’s overall championship titles (Grand Slam) for 2013–2014 in their divisions in the annual sports competitions among the 11 local tertiary institutions. The annual competitions were organised by The University Sports Federation of Hong Kong, China, (USFHK).
On its 30th anniversary, CityU made history by becoming the first and only institution to win the Grand Slam for an unprecedented eighth time. Sports teams from 11 local tertiary institutions attended the prize presentation ceremony on 27 April. In all, CityU teams won championship titles in 10 sporting events, 14 runners-up positions, and three third-placed positions (see table below). In addition, nine CityU athletes won the Most Valuable Player Awards in their respective events.

At the same time, Grace Lau Mo-sheung, a Year 2 BSc (Creative Media) student in the School of Creative Media, was named the USFHK Sportswoman of the Year from among the six nominees.
Grace is one of the core members of CityU women’s Karatedo Team which won the Karatedo competition. She said she was very happy when she found out she had won the award.
“I went to the prize presentation ceremony with a wait-and-see attitude since all the nominees are the best student athletes in Hong Kong. But I started to get nervous when I was watching the introduction video of the nominees in the auditorium. I was moved to tears by my teammates’ applause when my name was announced as the winner,” she said.
It has been a tough but rewarding year for Grace. “It is very challenging to maintain a balance between my studies and practising karatedo every day for three hours while occasionally going abroad for competitions,” she said. 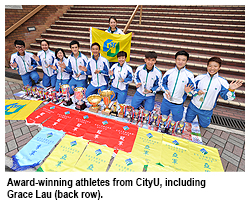 She thanked her teachers and classmates for their support, and was grateful to her teammates and coaches for their encouragement. She is currently in training for the Karatedo 1 Premier League - Jakarta 2014 where she will represent Hong Kong.
Professor Horace Ip Ho-shing, Vice-President (Student Affairs), Professor Paul Lam Kwan-sing, Chief-of-Staff, and Dr Wong Chi-tim, Director of Student Development Services, attended the award presentation ceremony which was held at Polytechnic University of Hong Kong to show their support to CityU sports teams and coaches.