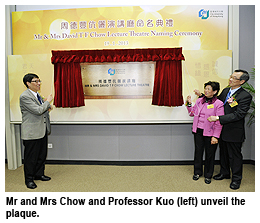 Mr Chow, founder and Managing Director of Easy Power Limited, is a successful entrepreneur who has made substantial contributions to education and philanthropy. He not only established a private foundation for the long-term support of school children and orphans in rural areas of China, but has also sponsored the construction of dozens of schools on the mainland. In addition, he has personally visited these rural areas and coordinated the construction work. What’s more, he has generously provided support to various charitable and non-profit organisations in Hong Kong.
Currently an executive committee member of the Hong Kong Optical Manufacturers Association, Mr Chow was awarded an Honorary Fellowship by The Professional Validation Council of Hong Kong Industries in 2008 in appreciation of his extraordinary contributions to the optics industry.
Officiating at the ceremony were Mr and Mrs Chow, Professor Way Kuo, University President, and Professor Roderick Wong Sue-cheun, Vice-President (Development and External Relations).
At the ceremony Mr Chow said, “My life philosophy has always been ‘giving to society what it has offered to me’, and it is based on this philosophy that I set up scholarships.” Mr Chow has made a donation to CityU to set up the Mr and Mrs David T F Chow Scholarship fund to help students in need.
He added that he has a special affinity with CityU. The venue where he was conferred the honorary fellowship in 2008 was CityU’s Wei Hing Theatre, and coincidentally, his wife’s name is also Wei Hing. 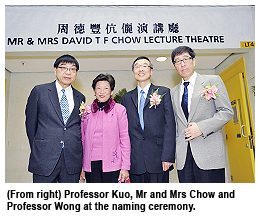 Professor Kuo praised Mr Chow for working hard to improve himself through self-study after work and not giving in to adversity when facing hardship in his youth. After he became a successful entrepreneur, he started to lend a helping hand to others. “Mr Chow has been devoted to contributing to society. I hope CityU alumni and students can take Mr Chow as their role model, equip themselves properly to meet external challenges, and contribute to society,” Professor Kuo said.
Professor Wong expressed his heartfelt thanks to Mr Chow for his support of CityU and its student development in his vote of thanks.
Located on the fourth floor of Academic 1, the Mr and Mrs David T F Chow Lecture Theatre is about 160 square metres in area and has a capacity of 120 seats. Equipped with state-of-the-art multimedia audio and visual equipment as well as a double-layered sound proofing system, it is a popular venue for lectures, seminars, international conferences and other events.