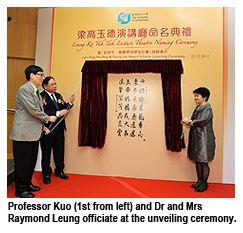 after the wife of distinguished alumnus and Honorary Fellow Dr Raymond Leung Siu-hong in appreciation of his support and generous donations to CityU over the years. A ceremony for the official naming of the lecture hall was held on 22 December.
The ceremony also marked the launch of an award scheme set up by Dr Leung to offer financial assistance to CityU students. The award was named after Dr Leung’s mother and mother-in-law: the Pang Miu Ping and Yeung Lan Award Scheme.
A successful entrepreneur, Dr Leung is Chairman of SAE Magnetics (HK) Ltd and Chairman and CEO of TDK China Co Ltd. Since completion of his undergraduate studies, Dr Leung has worked in the field of high-tech electronics and, in 2009, received his Engineering Doctorate (Engineering Management) from CityU.
Dr Leung has offered strong support to CityU over the years, not only because he is a CityU graduate but also because he concurs with CityU’s spirit of forging ahead to achieve strategic goals. 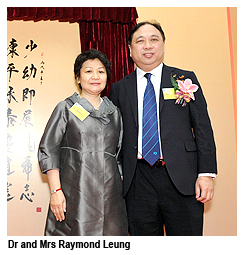 With a strong affection for his alma mater, Dr Leung has helped to foster the relationship between CityU and the industry by serving in many key posts at the University, including Honorary Advisor in the President’s Circle, Vice Chairman of the Executive Committee of the CityU Eminence Society, Patron of the CityU Business and Industrial Club, and Chairman of the Industrial Consortium of the Co-operative Education Centre at the College of Science and Engineering. Dr Leung received the title of Honorary Fellow by CityU in 2010 and the University’s Distinguished Alumni Award in 2011.
Professor Way Kuo, CityU President, expressed gratitude towards Dr Leung for his support of the University. “Dr Leung not only has achieved excellent performance in his professional field but also cares about the University and its students. He has offered his full support to the University’s teaching and learning initiatives and student development activities. I hope all students can learn from Dr Leung as a role model and contribute to society after graduation,” he said.
In his speech at the ceremony, Dr Leung said he wished to pay tribute through this event to the three women most important in his life – his wife, mother and mother-in-law.
He gave high praise to Mrs Leung Ko Yuk-tak as a good wife and gentle mother with traditional virtues. Dr Leung said she has devoted herself to their family and took care of their children so that he could concentrate on his work. 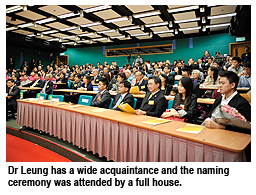 “When we were newlyweds,” Dr Leung said, “we had to live a frugal life. Soon after our three children were born, she decided to emigrate with them overseas so they could have a different type of education. It was not easy for her to live in a strange country far from home, as she spoke little English and didn’t know how to drive. However, in order to let me focus on my work, she never complained and lived through that difficult period. Without her efforts, neither I nor my children would be where we are today.”
Dr Leung also said he deeply respects his mother, Ms Pang Miu-ping, and mother-in-law, Ms Yeung Lan, for their loving care and gentleness. When Dr Leung was a small child, Ms Pang would line up outside factories in the early morning to get contract work so she could earn extra income for the family. She took good care of their family of six in the daytime, while doing piecework on plastic flowers, toys, watchbands or clothes at night. Similarly, his mother-in-law Ms Yeung took good care of her own family. As her husband had died early in their marriage, Ms Yeung had to work hard as a single parent to raise her four children and ensure they received a good education. 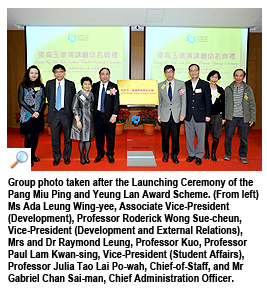 “Although they were living on a low income, my mother and mother-in-law maintained their dignity. Setting themselves as a good example, they inculcated us with good values and taught us to encourage each other and help others with kindness and generosity,” said Dr Leung. “They have deeply influenced me since my childhood. The dedication I inherited from them has been a driving force in my support of CityU’s commitment to education excellence. My mother and mother-in-law have enabled me to contribute to society. They made me understand the value of family and education as well as the spirit of teamwork and dedication.”
Dr Leung hopes the Pang Miu Ping and Yeung Lan Award Scheme can help CityU students in need and encourage them to overcome adversity.
“Many young people complain that they have fewer opportunities than what we had in the past. But actually opportunities are still there. The key is how they seize opportunities and outperform others,” he said. “Opportunities are for those who are well prepared. Young people should not grumble but study and work hard to seize opportunities. They should never give up.” 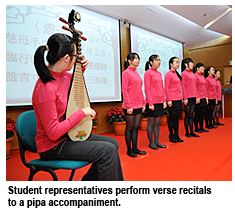 CityU student representatives performed verse recitals at the ceremony to praise a mother’s great love as a dedication to Dr Leung’s wife, mother and mother-in-law and in gratitude to Dr Leung’s contribution to the University.
Located on the 4th floor of the Academic 1 building, Leung Ko Yuk Tak Lecture Theatre has a seating capacity of 140. Fully equipped with a state-of-the-art multimedia audio and visual system, it can be used for teaching, seminars and international academic conferences.